The Czech Republic is expanding the capacity of its gas transport system to receive the gas delivered by the Nord Stream 2 natural gas pipeline, Russian Energy Ministry said in a statement on Tuesday. 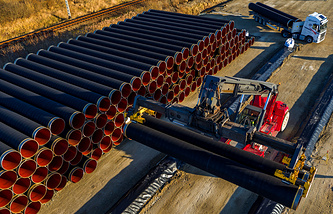 The working group on energy cooperation of the intergovernmental commission on economic, industrial and scientific-technical cooperation between the Russian Federation and the Czech Republic met in Prague earlier on Tuesday. The Russian side informed its Czech partners about implementation of the Nord Stream 2 project and the Energy Ministry’s long-term plans on development of the state renewable energy program.

“The Czech partners told about preparations to expanding the capacity of the gas transport system of the Czech Republic within the framework of the Nord Stream 2 project implementation, as well as about the plans to boost Russian oil transit via the Druzhba pipeline,” the statement said.

The Nord Stream 2 pipeline is expected to come into service at the end of 2019. The pipeline is set to run from the Russian coast along the Baltic Sea bed to the German shore. Each of the pipeline’s two stretches will have a capacity of 27.5 bln cubic meters. The new pipeline that is expected to connect the Russian resource base with European customers, will double the capacity of the first line and will basically follow its route.

The total cost of the project has been estimated at 9.5 bln euro. Gazprom is the only shareholder of Nord Stream 2 AG. Gazprom’s European partners in the project are Engie, OMV, Royal Dutch Shell, Uniper and Wintershall.