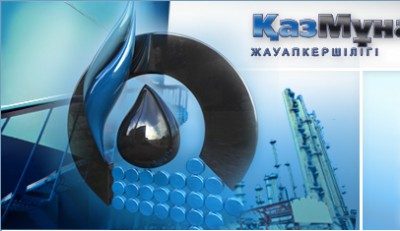 In first quarter of 2018, Kashagan oil production increased 79% to 2,866 thous. tonnes (the KMG share was 237 thous. tonnes). The growth was due to the commissioning of a crude gas reinjection system at the end of August 2017, the commissioning of offshore and onshore technological equipment and facilities and oil production stabilisation measures;

The Company’s cost of sales increased 56% year-on-year to 797 bln tenge (USD 2,465 mln), mainly due to the rising cost of crude oil purchased from TCO under the long-term oil and LPG supply agreement by 223 bln tenge (USD 690 mln), and growth in natural gas exports to China and Uzbekistan of 21 bln tenge  (USD 66 mln).

KMG’s operating loss in first quarter of 2018 amounted to 127 bln tenge (USD 394 mln) vs. 9 bln tenge (USD 28 mln). KMG operating profit does not include revenue from the sale of oil and oil products through KMG I, due to the fact that KMG I is being sold, and for that reason is treated as discontinued operations in the KMG consolidated financial statements. However, due to a change in the purchasing mechanism, the cost of sales related to the purchase of oil and oil products for KMG I trading purposes began to be accounted for in KMG operating profit starting from third quarter of 2017. As a result, KMG operating losses have increased year-on year. In turn, KMG net profit is recognised and recorded as profit from discontinued operations[6].

In first quarter 2018 capital expenditure was 82 bln tenge (USD 253 mln), which is a 44% year-on-year drop, caused mainly by the completion of investment in downstream operations.

In first quarter of 2018, total oil and gas condensate production across the KMG Group amounted to 5,862 thous. tonnes, which is 2% higher than the same period last year.

In the first quarter of 2018, the KMG share in Kashagan (North Caspian Operating Company N.V. – NCOC) production increased 79% year-on-year to 237 thous. tonnes of oil and 138 mln m3 of gas, which was as a result of the commissioning of a crude gas reinjection system at the end of August 2017, the commissioning of offshore and onshore technological equipment and facilities and oil production stabilisation measures.

TCO registered a small increase in oil and gas production. KMG’s share in TCO was 1,460 thous. tonnes of oil and 815 mcm of gas, which is up 2% on first quarter 2017, due to steady production plant performance.

Kazakhturkmunai LLP produced 92 thous. tonnes of oil or 12% less than in the first quarter of 2017. Gas production was also down year-on-year, by 39%, at 49 mln m3. The general decrease in production was caused by technical limitations on gas volumes received at the Tolkyn gas treatment unit.

In the first quarter of 2018, a decline in production was observed at the mature fields of JV Kazgermunai, PetroKazakhstan Kumkol Resources and Turgai Petroleum due to natural decreases in oil production and increases in the water cut.

Hydrocarbon reserves (proven A, B and C1 category)

As at 31 December 2017, according to the Kazakhstan State Commission for Mineral Reserves, KMG’s liquid hydrocarbon reserves (net of the KMG share) amounted to 683 mln tonnes[7] (7,954 mln. barrels of oil equivalent[8]).

KMG’s proven hydrocarbon reserves decreased by 4% or 29 mln tonnes (300 mln barrels of oil equivalent) from the previous year mainly due to annual production and the revaluation of Karachaganak Petroleum Operating B.V. (KPO) reserves. In 2017, the Kazakhstan State Commission for Mineral Reserves reaffirmed KPO’s oil recovery factor, and as a result reserves fell by 24% (11 mln tonnes) year-on-year.

The main drivers for oil transportation growth were Caspian Pipeline Consortium (CPC) and Kazakhstan-China Pipeline (KCP) due to increased oil supplies by shippers to the systems, and increases in oil production at Kashagan. In the first quarter of 2018, KMG’s share in CPC and KCP rose 15% and 3% year-on-year to 3,102 thous. tonnes and 1,999 thous. tonnes of oil, respectively.

Oil transported by sea increased 14% year-on-year to 1,713 thous. tonnes due to tanker reorientation and the fact that regulations tightened in the first quarter of 2017 for sulphur content in crude oil entering the Transneft pipeline system on the Aktau-Makhachkala route. As a result, Kazakhstan suppliers agreed to increase heavy crude oil shipments in 2018.

Gas transported for export increased by 40% year-on-year to 5.6 bln m3, mostly due to increases in exports to China, including through the AGP and BSGP pipelines starting from October 2017, in accordance with an export contract between KTG and PetroChina International Company Limited.

Hydrocarbon refining output in Kazakhstan refineries, net of the KMG operating share, in the first quarter of  increased by 7% compared to 2017 to 3,242 thous. tonnes: