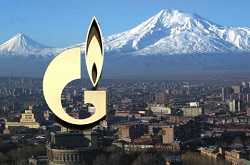 Georgia’s refusal to buy Russian gas will not pose any threats to energy security of Armenia. Russia will not cut gas supply to Armenia. However, Georgian government’s decision will eventually oust Armenia from reginal energy projects, Vahe Davtyan, an expert in energy sector, told EADaily.

Earlier, Energy Minister of Georgia Kakha Kaladze said no gas import deal will be made by the end of the year. According to the Energy Ministry, in Jan-Mar 2017, natural gas import from Russia totaled 100 million cubic meters, in February – 70 million cubic meters. Starting April, Georgia will fully shift to import of gas from Azerbaijan for both the population and the industrial sector.

In this light, Davtyan recalled, establishment of a swap energy corridor Iran-Armenia-Georgia has been discussed much throughout 2016.

“Having no necessary infrastructure to deliver Iranian gas to Georgia, Armenia would become a regional gas hub through its swap supplies. Part of the Russian gas that is supplied to Armenia via Mozdok-Tbilisi pipeline would remain in Georgia and Armenia would replenish the deficit with supplies from Iran,” Davtyan said.

Armenia would become an important actor in the energy sector at the regional level ensuring certain financial flows to Iran as well. Gas consumption in Georgia is about 12 million cu m daily, with Azerbaijan supplying most of it, amid 10% gas supplies from Russia. Considering gas infrastructure development rate, consumption will grow to 13 million cu m by the end of 2017. So, 1-1.5 million cu m of the given volume could be swap supplies.

In early November, 2016, Armenia’s government set up Energoimpex company to ensure transit of Iranian gas to Georgia. “However, as Tbilisi refuses from Russian gas, the idea of swap energy corridor turns senseless, unfortunately,” the expert said.