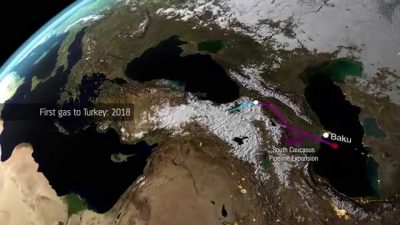 Of this amount, $11.8 billion is to be financed by Azerbaijan, Isayev said.

“To date, $7.8 billion of this amount has been allocated,” he noted.

“The cost of the Shah Deniz Stage 2 project is $23.9 billion. As of today, $16.4 billion of this amount has been provided, and the project itself is completed by 96 percent.”

“The cost of expanding the South Caucasus Pipeline is $4.7 billion, $3.8 billion of which has already been allocated. The project has been completed by 98 percent,” Isayev noted.

“The cost of TANAP [Trans Anatolian Natural Gas Pipeline] is estimated at $8 billion [compared to the initial $9.5 billion]. As of today, $4.5 billion has been used, and the project has been completed by 82 percent. TAP [Trans Adriatic Pipeline] is estimated at 4.5 billion euros, 2.3 billion euros of which has been already allocated. The progress there stands at 53 percent,” Isayev added.

He noted that the first gas volume from Shah Deniz Stage 2 will be delivered to Turkey by the end of 2018.

Isayev said Azerbaijan’s share in the project was financed from several sources.

“In 2014, Eurobonds worth $2.5 billion were issued in Azerbaijan’s domestic market, and those Eurobonds were purchased by the State Oil Fund of Azerbaijan (SOFAZ),” Isayev said. “Capitalization worth $2.4 billion was implemented in 2015. In 2016 and 2017, there were two Eurobond issuances, each worth $1 billion, in the Irish Stock Exchange.”

As part of the Stage 2 of the Shah Deniz development, the gas will be exported to Turkey and European markets by expanding the South Caucasus Pipeline and the construction of Trans Anatolian Natural Gas Pipeline and Trans Adriatic Pipeline.