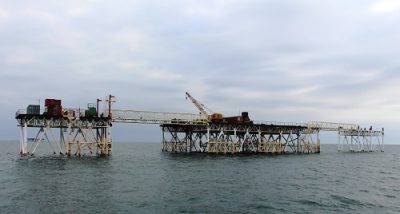 According to SOCAR, Well No. 78, which is being drilled from Offshore Platform No. 6, will be put into operation in July. The daily production rate of this well is expected to be 150 tons of condensate and 500,000 cubic meters of gas.

In September, it is planned to commission Well No. 123 from Offshore Platform No. 122. The daily production rate of this well is expected to be 150 tons of condensate and 800,000 cubic meters of gas.

According to SOCAR, in 2018 it is planned to commission two more production wells in the Bulla Deniz field.

In addition, in 2018, it is planned to commission new stationary Offshore Platform No. 12, construction of which began in Bulla Deniz in the first quarter of this year, SOCAR reports.

Platform No. 12, designed to drill 5 production wells, will be installed at a depth of 30 meters. The expected total daily production from the wells will be 2.5 mcm of gas and 500 tons of condensate.

The offshore field Bulla Deniz was discovered in 1973 and put into operation in 1975. In August 2013, in exploration drilling at a depth of 5,900 – 6,100 meters, new gas layers were discovered. The development of the field is handled by the Oil and Gas Production Department named after N. Narimanov (a unit of Azneft Production Association).