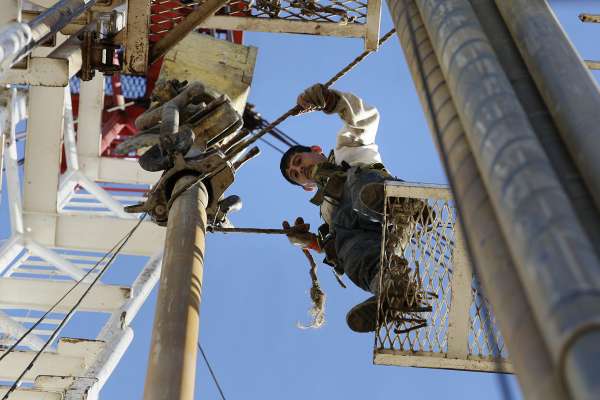 For the oil and gas sector in Scotland, coronavirus is merely one part of its current nightmare.

For the oil and gas sector in Scotland, coronavirus is merely one part of its current nightmare.

It’s been the catalyst that has brought upon it a confluence of massive challenges around maturing assets and structural change, pressure over climate change, and geo-politics.

This week, we learned from a survey by Oil and Gas UK – the representative body for the industry, which is also one of the more reliable sources of data about it – that up to 30,000 jobs are at risk in the UK sector.

That’s a very rough figure. It could be significantly worse, but it feels unlikely to be much less serious than that. And the job numbers are a measure – a distillation, if you like – of the impact from numerous other changes coming down the pipeline.

The UK industry is at the mercy of the oil price, over which it has no control. It is being battered by geopolitical rivalries between Saudis and Russia.

With Asian demand for oil being hit hard by China’s shut-down, their 6 March failure to do a deal on cutting supply sent the price of Brent crude oil barrelling downwards.

That was as it was as it became clear that Europe and North America would also face a shutdown and sudden stop to much economic activity, including the grounding of entire airlines and traffic being cleared off roads.

With supply far outstripping demand, the excess has to be stored somewhere. That capacity is getting close to the brim. By last week, around 80 ocean-going supertankers were being used for storage, some in the Firth of Forth.

It was the storage shortage that led to the price of the North American benchmark – West Texas Intermediate – turning negative in April, as contracts closed for May delivery. Where traders had failed to secure the rights to the diminishing amount of storage available, notably at the delivery point of American oil in Cushing, Oklahoma, they had to pay others to take oil off their hands.

The geopolitics goes on: Saudi and Russia tussling for control and share of markets, others such as Venezuela hit exceptionally hard by reduced revenue, and President Trump… well, who knows what he’s trying to do?

He wants others to push the price back up, to help US producers, and US lenders who are exposed to loans turning sour in Texas and the Dakotas.

Yet the president won’t want to see the effect of increased fuel prices on his core voters come November, when they’re already struggling with the economic impact of shutdown. More than 30 million Americans having registered as unemployed in the past few weeks.

The low oil price, where far less tax is paid on car fuel than in Europe, is like a giant tax cut for American drivers. Low fuel prices also behave like a fiscal stimulus for airlines – at least those that haven’t hedged on the expectation that prices would be much higher.

With some US states beginning to relax the grip of lockdown, and some European countries too, the oil market picked up a bit last week. America’s WTI benchmark has begun the new week down a further 8%, to $18, and at risk of another collapse as contracts close, in two weeks, for June delivery.

Meanwhile, with less of a bottleneck on storage, Brent crude – used by the rest of the world’s market as the benchmark – is down 3% with the start of a new week’s trading, to below $26, having recently reached an 18-year low below $18.

Gas at a peep

We talk a lot about the oil price, but much less about gas. And this week’s Oil and Gas UK report had some interesting reflections on what has been happening to it, at least as it affects the industry and market in Britain.

Gas is less of a global market. Most of it gets from wellhead to central heating boiler and kitchen hob by pipeline, so the market has been determined by supply, demand and constraints on continental pipeline networks. That’s changing though.

At the start of last year, a therm of North Sea gas was wholesaling at 60 pence. That’s for one day ahead, which is a measure of volatility as well as value. Most of the gas we use has been bought well in advance.

In the first quarter of this year, the day-ahead price averaged 25 pence. On April 21, it bottomed out at 10.4 pence.

That’s not because of OPEC or Russia. Demand is down. We’re more fuel efficient, with buildings better insulated. We had a mild winter so there was less need for heating.

Britain’s total demand for gas fell over the past decade by 22%.

Gas is being replaced by renewable sources in generating our electricity. In the past four years, Britain’s use of gas in power stations has fallen 10%.

Last year alone, use of gas in Britain was down 3.9%. Slightly more than half of it came from UK gas-producing fields, which were also exporting to Ireland and Belgium.

These falls were before the lockdown. In the past few weeks, industrial demand for gas dropped 16%, Our use of electricity dropped by 15% – mainly in workplaces, while home use has risen, for home entertainment and as people work from home.

The other big change is in supply. There are more pipelines bringing gas from Norway, and a lot more liquified natural gas (LNG) is being shipped here, from the Persian and Mexican gulfs.

Last year, saw LNG imports more than double, accounting for 39% of Britain’s imported gas. That competition drives the price down as well.

So with prices down, what have we learned from Oil and Gas UK about the state of the industry, beyond those jobs at risk?

It reckons this year could see companies going cash negative for the third time in 40 years.

The average barrel of oil or its gaseous equivalent can be produced from UK waters for $15.20.

That’s the result of harsh cost-cutting from free-spending days in the 2010-14 offshore investment boom, which led to production costs averaging above $30 per barrel. (That doesn’t include exploration and development costs.)

So the UK industry is in a leaner, fitter state than when the oil price last plunged. With Brent crude ending last week at $26, producers can still break even. But that’s the average. Some fields, and particularly the older ones, are more expensive, at up to $64 per barrel for production costs alone.

So production costs are being squeezed, where there’s further room to do so, and that usually means bearing down on supplier contracts. Some production levels will be cut back too.

More significant is the slashing at investment plans while holding back on committing to new ones. Every day or two, it seems, another company reports cutbacks by the hundreds of millions of dollars.

This week, it was EnQuest and Ithaca Energy – two of the bigger producers in the North Sea these days, having bought a lot of assets from more familiar energy brands Shell and Chevron.

The survey by Oil and Gas UK suggests more than half of companies will more than halve their capital expenditure plans.

They were already expected to fall this year by 20 to 30% from the recent average, to reach the $4bn to $4.5bn range. They could end up a long way below that because of the low price, perhaps to the lowest level since the early 1970s, when the industry was getting under way.

That directly affects those in the supply chain, who provide rigs and drilling equipment, engineering, data services, shipping, offshore catering, and so on.

A lot of these companies are important exporters, and face similar cutbacks overseas to the ones in Scotland.

It is those supply companies that are the focus of attention for industry calls for a special sector deal to weather the current economic tempest, pumping in government funds to keep them from collapse, and perhaps even accepting that government funds will be heading into the equivalent of a “bad bank” carrying bad loans.

There are plenty people who will be outraged at the industry wanting more fiscal support, when it has been highly profitable in the past, and continues to provide the feedstock for climate changing emissions.

The industry response is that these same engineering companies are among Britain’s best hope for a transition to a net zero carbon economy – with carbon capture and storage back on the agenda after several false starts, and at the next frontier of making hydrogen as an energy source both safe and financially viable.

The result of expenditure cuts now is lower oil and gas production in future. The lead time from capital expenditure to production varies, but it’s measured across several years.

That investment boom beginning ten years ago opened up new fields, some of the biggest to the west of Shetland.

Since then, 40 fields have come on stream, mostly in Scottish waters, and Oil and Gas UK tells us that these pumped more than a third of the UK total production last year.

So rather than rely on old fields continuing to produce, at a rising cost per barrel, the industry would prefer to develop new, larger, more efficient fields – if that’s financially viable. At current prices, with recent volatility, few in UK waters will meet that financial test.

Drilling activity has been low for years. It’s now getting lower.

Exploration drilling has all but halted this year. Development projects, which are drilled to extend extraction within an existing field, dropped from 21 wells in April last year to only three last month, and the same expected this month.

If there aren’t more wells like that being sunk, then production is going to fall faster than expected.

And with profits squeezed hard, there is little prospect of significant tax take – either for HM Revenue and Customs, or those surveying the financial outlook for an independent Scotland.