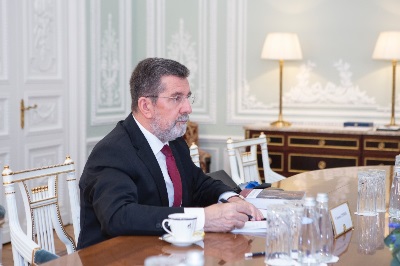 A working meeting between Alexey Miller, Chairman of the Gazprom Management Committee, and Slavenko Terzic, Ambassador Extraordinary and Plenipotentiary of the Republic of Serbia to the Russian Federation, took place in St. Petersburg today.

The parties discussed issues related to bilateral cooperation. The meeting participants spoke, among other things, about Russian gas exports to Serbia, noting the reliability of gas supplies and the rising gas demand in the country. According to preliminary data, in the period from January 1 through July 12, 2018, gas exports to Serbia totaled 1.2 billion cubic meters, an increase of 5.3 per cent from the same period of 2017.

Alexey Miller informed Slavenko Terzic of the progress in the construction of the TurkStream gas pipeline, with over 1,230 kilometers of pipes already built along the two strings, which translates into 66 per cent of the pipeline’s offshore section. The meeting also touched upon the measures being taken by Serbia to develop the national gas transmission system.

Gazprom’s main partner in Serbia is Srbijagas, a state-owned company focused on gas transportation, storage and distribution in Serbia.

On December 19, 2017, the Addendum to the long-term contract between Gazprom Export and Yugorosgaz for Russian gas deliveries to Serbia was signed. According to the document, the amount of gas supplies under the contract would be increased from 1.5 billion cubic meters to 2 billion cubic meters per year starting from 2018.

On June 3, 2017, Gazprom Export and Srbijagas inked the Memorandum of Understanding for the expansion of the Banatski Dvor UGS facility (Gazprom – 51 per cent, Srbijagas – 49 per cent).

TurkStream is the project for a gas pipeline stretching across the Black Sea from Russia to Turkey and further to Turkey’s border with neighboring countries. On April 30, 2018, the first string of the pipeline’s offshore section was completed. Construction of the second string is currently in progress.

The construction project for a thermal power plant in Pancevo, Serbia, is being implemented in accordance with the Agreement between the Gazprom Energoholding Group and the Gazprom Neft Group with the purpose of improving the reliability of electricity and heat supplies to the refinery in Pancevo, as well as creating opportunities for selling electricity in Serbia’s domestic market and on the energy exchanges of other European countries. The TPP’s combined cycle power unit will have the maximum capacity of 200 MW.