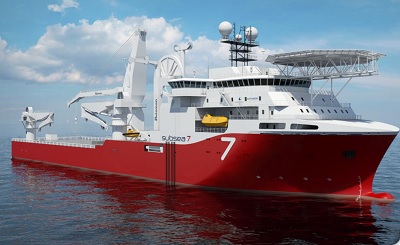 ‘Market activity maintained momentum this quarter with several awards to market. Our differentiated offering, strong client relationships and early engagement capability helped us to grow order backlog. Our strategic focus on extending our global presence was affirmed with the first contract awarded to Subsea 7 under the acquired long-term agreement (LTA) with Saudi Aramco, offshore Saudi Arabia, and a new Life of Field contract in the Caspian Sea.

Vessel utilisation and offshore activity in the quarter was low, reflecting the seasonality of operations in the North Sea and the impact of fewer large projects. Our engineering, procurement and fabrication activities progressed well in preparation for offshore installation campaigns in the summer months. Adjusted EBITDA margin fell to 13%, despite continued operational excellence and cost discipline. Our full year guidance for revenue as broadly in line and adjusted EBITDA percentage margin as significantly lower compared to 2017, remains unchanged.

The oil price downturn has stimulated industrywide innovation and partnerships as well as counter-cyclical investments in technology. Following on from strategic actions in 2017, we have made targeted investments in renewables and early engineering during the first quarter and affirmed our commitment to integrated SPS and SURF solutions with the announcement that we will form a joint venture with Schlumberger.’

SURF and Conventional projects progressed well and the six active PLSVs offshore Brazil achieved high levels of utilisation. Offshore Egypt, the Atoll project was completed and the West Nile Delta Phase Two project started pipelay operations late in the quarter withSeven Borealis and prepared for umbilical installation. In Australia, fabrication activity continued on the Sole project and in the US Gulf of Mexico the TVEX project was substantially completed. In the North Sea, the seasonally more challenging operating conditions resulted in lower levels of offshore activity. The Oda project progressed with pipeline fabrication at the Vigra spoolbase in Norway and on the Aasta Hansteen project preparations were made for the topside tow-out and connection.

The Beatrice wind farm project, offshore UK, continued to fabricate and install foundation jackets, with installation expected to accelerate in the second quater. The second offshore campaign for cable-lay operations commenced in March and the project remains on schedule for completion later this year. The Borkum II project for wind farm foundations, offshore Germany, progressed with engineering and procurement.

Active vessel utilisation was 58% in the first quarter and total vessel utilisation was 52%. Four vessels have left the fleet in the quarter, with the chartered vessel Lewek Constellation returned to its owner at the end of its operations on the TVEX and OCTP projects, and three older owned vessels, Seven Condor, Rockwater 1 and Seven Osprey were released for recycling. One chartered Life of Field vessel was added to the fleet for IRM activity, offshore Azerbaijan.

First quarter revenue of $809 million and Adjusted EBITDA of $103 million resulted in an Adjusted EBITDA margin of 13%. The lower revenue and Adjusted EBITDA compared to the prior year reflected deterioration in activity levels due to seasonality of northern hemisphere operations and fewer large projects progressing with offshore campaigns. Net loss of $18 million included net foreign currency losses of $22 million, recognised within other gains and losses, and a tax credit of $12 million. Diluted loss per share was 3 cents.

Cash and cash equivalents was $1,007 million at 31 March 2018 and net cash was $730 million. Cash generated from operating activities of $6 million included a $60 million decrease in net operating liabilities. In April, after the end of the first quarter, the Group completed the acquisition of Siem Offshore Contractors and two related vessels, resulting in a cash outflow of approximately $170 million. 675,000 shares were repurchased for an approximate value of $8 milion. The special dividend of NOK 5.00 per share was approved at the AGM in April and will be paid in May.

The oil and gas cycle is gradually recovering from the very low levels of activity experienced in the last three years and awards to market are increasing, however pricing remains challenging in the near term. The outlook for offshore renewables market activity is on a moderate growth trajectory, but with volatility year on year.