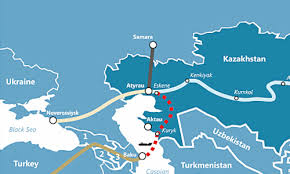 Baku and Astana set up two working groups on the issues of transporting Kazakh oil and gas through Azerbaijan to world markets. Such a statement was made by Energy Minister Kanat Bozumbayev to journalists in Baku 7 December. 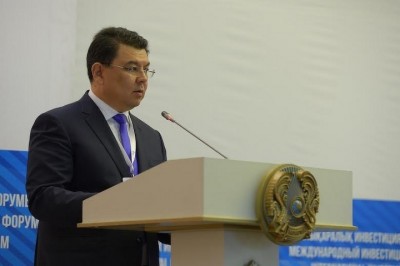 “The volumes of Kazakh gas production will increase and Azerbaijan will be considered as export routes,” said Bozumbayev. According to Bozumbayev, for the first time since this year Kazakhstan began exporting a large volume of gas to China. “The contract provides for the delivery of 5 bcm of gas in 2018. In addition, at present, Kazakhstan also cooperates with the Russian Gazprom in the issue of gas supplies,” the Minister added.

As one of the options, we are considering the construction of an LNG plant in the West of Kazakhstan with the subsequent transportation of this product through Azerbaijan to the world markets,” said Bozumbayev. According to him, Kazakhstan has reached an agreement with Azerbaijan on the creation of an ad-hoc working group of representatives of relevant ministries and departments.

“We agreed to establish a working group on the transit of Kazakh oil through Azerbaijan, which will have to work out the pipeline and transshipment capabilities of Azerbaijan for receiving Kazakh oil and the competitiveness of this route,” Bozumbaev said.

According to him, currently 250 million barrels of oil are produced from the Kashagan field, and in 2018 this figure is projected to grow 1.5 times. In addition, work continues on the Tengiz field expansion project, for which $ 37 billion has been invested. “This will allow us to increase production by 12 million tons year on year from the Tengiz field and in 3 years 39-40 million tons of oil will be produced there. At Kashagan, the annual production of oil can reach 12-13 million tons,” he stressed.

The Minister recalled that at present the main route for the export of Kazakh oil is the Caspian Pipeline Consortium (Tengiz-Novorossiysk). For Kazakhstan, its throughput capacity is 53-54 million tons. In addition, Kazakhstan delivers oil to China.

“Taking into account the development of the Kashagan and Tengiz fields, as well as a number of other deposits, additional volumes of oil will appear in 3-4 years for transportation to the world markets, therefore we consider, among other things, a very promising direction of export through Azerbaijan,” the Minister said.