Today Bulgaria meets its needs at the expense of Russian gas, Bulgarian Deputy Prime Minister Tomislav Donchev said in an interview with Trend. 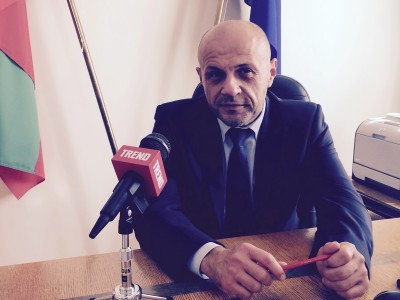 Donchev said the diversification of sources and routes of Russian gas supplies to Bulgaria is vital, and in this aspect Azerbaijan can become an important partner for Bulgaria.

“In its turn, Bulgaria is ready to become a transit country for Azerbaijani gas supplies to Europe,” he said.

“The IGB approximate capacity will hit 20 billion cubic meters of gas a year,” Donchev said. “Taking into account the projected capacity of the interconnector with Greece and designed bridges connecting it to the gas transport systems of Romania and Serbia, Bulgaria’s gas distribution opportunities throughout Europe are being significantly increased. This is while Azerbaijan can plan to supply many more volumes of gas to Bulgaria and entire Europe.”

“Bulgaria has a number of projects for cooperation with Azerbaijan in the energy sphere,” he said. “But first it is necessary to build the interconnector to implement them.”

“Bulgaria does not lose hope that this issue will be resolved very soon,” he said. “Bulgaria and Greece will get the opportunity to join the projects of the Southern Gas Corridor and thus receive the Azerbaijani gas through IGB construction.”

IGB is the gas pipeline, which will allow Bulgaria to receive Azerbaijani gas, in particular, the gas extracted from Shah Deniz gas condensate field stage II.

IGB is expected to be connected to the Trans-Adriatic pipeline via which gas from the Shah Deniz field will be delivered to the European markets. Bulgaria intends to build a pipeline, which will be connected with the Trans-Adriatic Pipeline (TAP) in the future. Azerbaijani gas will be delivered to Europe via this pipeline. Thus, Bulgaria will be able to receive gas from Azerbaijan.

A Memorandum of Understanding and Cooperation was signed between TAP and ICGB in January 2014.

The document gives an opportunity for cooperation between the two companies that will work together on connecting the pipelines in the vicinity of Komotini (Greece), which will open the way for new supplies of gas to the gas distribution network in Bulgaria, and further to the South-Eastern Europe.

TAP project is designed to transport gas from the Caspian Sea region to Italy’s south through Greece, Albania and the Adriatic Sea and further to West Europe. The total length of the pipeline will be near 870 kilometers.

The deputy prime minister went on to add that the capacity of the existing Russia-Ukraine-Moldova-Romania gas pipeline is 25 billion cubic meters, however the fate of the pipeline is in question, it is not clear what will happen to it, as the political situation changes quite rapidly.

The cooperation between Azerbaijan and the EU in the energy sector opens up good opportunities for us, he said.

“Energy cooperation with other countries of the Caspian basin is also of great interest for Bulgaria,” said the deputy prime minister. “Turkmenistan and Iran have large reserves of energy resources to become alternative sources for ensuring energy security of Europe.”

As for the possibility of Bulgaria’s participation in the Turkish Stream project, Donchev said that for the present, it is difficult to say anything about this issue, the time will tell.

“The relations between Azerbaijan and Bulgaria in the political sphere can safely be called excellent,” said the deputy prime minister.

The visit of Azerbaijani President Ilham Aliyev to Bulgaria in March 2015 and the visit of Bulgaria’s Prime Minister Boyko Borissov to Azerbaijan in June 2015, the friendly atmosphere in which the high-level negotiations were held, is an example, according to Donchev.

In recent years, the bilateral economic relations between the two countries have become special due to the sides’ interest to develop the cooperation in all spheres of economy, he added.

Donchev said that there are many promising spheres where the cooperation can be mutually beneficial.

The deputy prime minister believes that tourism is an important sphere where both countries can have mutually beneficial cooperation.

“Over 20 percent of Bulgaria’s GDP accounts for the revenues from tourism,” said Donchev. “Both summer and winter tourism have developed in the country and Azerbaijan also pays great attention to developing this sector.”

Development of cooperation in this sphere can be beneficial for both countries, he added.

Construction sector, construction of road infrastructure, roads, metro, and recycling of household waste are additional areas for cooperation between the two countries, according to the deputy prime minister.

He also attributes the success, achieved by his country in this area, to the impact of cooperation with European funds.

“All this, ultimately, strengthens the country’s economy,” Donchev said. “The cooperation with European funds means, first of all, the efforts to maintain political values and transparency.”

He added that Bulgaria, as a new EU member, has a right to an uninterrupted financing and hopes to maintain this right up to 2020.

“Most of the funds were directed by the government to ensure a financial transparency, train highly skilled specialists and so on,” said the deputy prime minister.