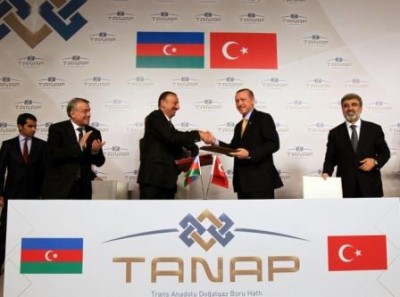 Trans-Anatolian gas pipeline (TANAP) will contribute to the growth of the Turkish economy, the Minister of Energy and Natural Resources Taner Yildiz said in an interview with TRT Haber.

The TANAP project is a very important and strategic project for Turkey, as it will help to resolve the issue of gas shortage in the country, the minister said.

On December 17, 2013, a final investment decision was made on the Stage Two of the Shah Deniz offshore gas and condensate field’s development. The gas produced at this field will first go to the European market (10 billion cubic meters).

The gas to be produced as part of the Stage Two of the field’s development will be exported to Turkey and to the European markets by means of expanding the South Caucasus Pipeline and construction of the Trans-Anatolian Gas Pipeline (TANAP) and the Trans-Adriatic Pipeline (TAP).

Azerbaijan with total gas reserves in the volume of about three trillion cubic meters will be able to begin supplying fuel to Europe via the planned Trans-Adriatic Pipeline. TAP’s initial capacity will be 10 billion cubic meters of gas per year with possible expansion up to 20 billion.

Turkey also has an agreement with Algeria and Nigeria for the supply of 4.4 billion and 1.2 billion cubic meters of liquefied natural gas respectively per year.

Around 20.7 percent of the total volume of gas imported by Turkey accounted for consumers among the population, 45.85 percent – electricity generation. Around 25.11 percent of the imported gas was used in the industrial sector of the country.