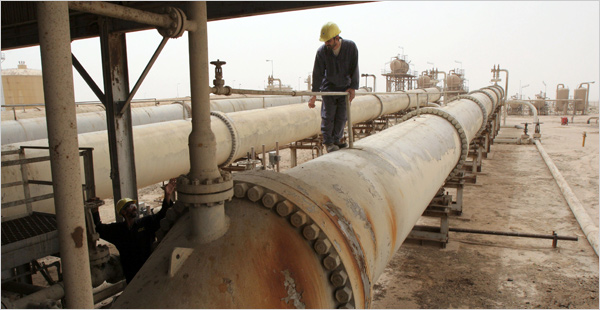 (Bloomberg) — Iraq plans to cut oil output in January and February to make up for breaching its OPEC+ quota last year, according to the state company that markets the nation’s crude

OPEC’s second-biggest producer will pump around 3.6 million barrels daily for the two months, according to Ali Nizar, the deputy head of SOMO. That would be the lowest level since early 2015 and compares with around 3.85 million in December, according to data compiled by Bloomberg.

Exports, including those from the semi-autonomous northern region of Kurdistan, will be slightly more than 3 million barrels a day during the period, Nizar said in an interview in Baghdad, the capital. The figure for last month was almost 3.3 million.

Baghdad’s ability to meet these targets depends on whether the Kurdistan Regional Government agrees to reduce supplies from fields under its control, Nizar said. The central government has complained in the past that it can’t control Kurdish production.

OPEC+, an alliance between the Organization of Petroleum Exporting Countries and others such as Russia, agreed in April to slash output and bolster oil prices, which had been hammered by the spread of the coronavirus. Saudi Arabia later criticized Iraq and other members including Nigeria for pumping above their caps and called on them to make compensatory cuts.

Iraq is still committed to the OPEC+ deal, which runs until next year, Nizar said.

Its decision to pump less oil follows a similar action by Saudi Arabia earlier this month. With the virus still raging, the kingdom said it would reduce production in February and March by 1 million barrels daily, a surprise move that caused oil prices to rise.

Tanker-tracking data suggest Iraq is already selling less crude. Exports slipped to just over 3 million barrels daily in the first 15 days of January, according to data compiled by Bloomberg.

Brent crude has almost tripled to around $55 a barrel since OPEC+ begun restricting supplies. But it’s still far short of what Iraq needs to balance its budget and bolster its economy. The International Monetary Fund forecast that Iraq’s gross domestic product would contract 11% in 2020, more than that of any other OPEC member under an output quota.

The government is in talks with the IMF for $6 billion of loans, Finance Minister Ali Allawi said in a separate interview.

Iraq is mulling whether to build or use oil-storage facilities in Asia to reduce the risk of it not being able to send crude to its main customers, according to SOMO’s Nizar. Persian Gulf neighbors Saudi Arabia and the United Arab Emirates already stockpile some of their crude in Japan, South Korea and India.

Most of Iraq’s oil has to pass through the Strait of Hormuz. Iranian forces have targeted tankers traversing the chokepoint several times since early 2019 and threatened to block it in the past.

Iraq plans to export an average of 1.1 million barrels a day of its new Basrah Medium grade of crude, Nizar said. The first cargo was shipped this month.

Prime Minister Mustafa Al-Kadhimi’s cabinet is yet to sign off on a multibillion-dollar supply deal with China’s Zhenhua Oil Co., according to Nizar. Under the terms, SOMO will supply roughly 130,000 barrels a day of crude to for up to five years, with Zhenhua paying for the first year upfront.

The pre-payment oil contract, a first for Baghdad, underscored the government’s need for cash.