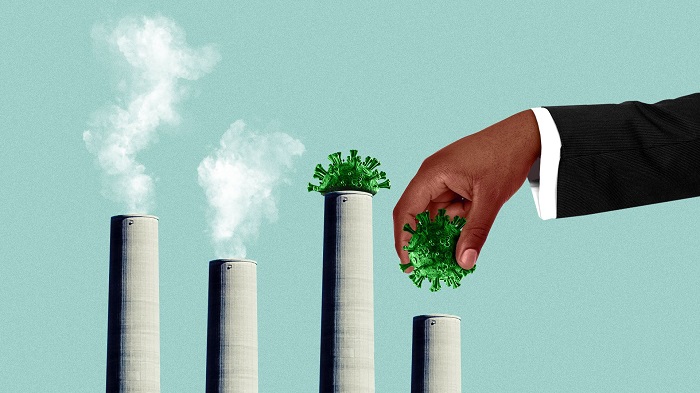 Human emissions of the greenhouse gases responsible for climate change will fall between 4.2% and 7.5% this year due to the global industrial slowdown caused by coronavirus lockdowns

But carbon dioxide levels in the atmosphere will continue to go up, albeit at a slightly reduced pace, according to preliminary data by the World Meteorological Organization released on Monday. The short-term impact of the Covid-19 pandemic can’t be distinguished from natural variability, the United Nations agency said.

“The lockdown-related fall in emissions is just a tiny blip on the long-term graph,” WMO secretary general Petteri Taalas said in a statement. “We need a sustained flattening of the curve.”

Carbon dioxide remains in the atmosphere for centuries, and in the ocean for even longer. That means concentrations of the warming gas will continue to rise for years, even if human emissions fall or are brought to a halt. In 2019, carbon dioxide in the atmosphere breached a new threshold of 410 parts per million, from 400 parts per million in 2015, according to the WMO’s Greenhouse Gas Bulletin released on Monday.

“Such a rate of increase has never been seen in the history of our records,” Taalas said. “The last time the Earth experienced a comparable concentration of CO₂ was 3-5 million years ago, when the temperature was 2-3°C warmer and sea level was 10-20 meters higher than now —but there weren’t 7.7 billion inhabitants.”

Concentrations of CO₂ in the atmosphere were 48% higher in 2019 than 1750, according to the report. The increase observed from 2018 to 2019 was larger than that observed during the previous one-year period, and larger than the average over the last decade.

Methane presence in the atmosphere were up by 160% from pre-industrial times, while nitrous oxide was up 23%.