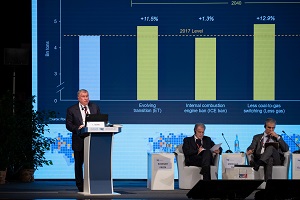 Rosneft Chief Executive Officer Igor Sechin made the key report during the XI Eurasian Economic Forum in Verona (Italy). The main topic of the forum is “Economy of trust and diplomacy of business from the Atlantic to the Pacific”.

The head of Rosneft noted the high importance of the issues discussed at the forum and the relevance of the chosen topic. “We have become witnesses of the historic time for the global energy industry”, – said Igor Sechin. In his opinion, the current realities of world economic policy differ sharply from the creative work on building common interests of the “economy of trust”.

The forum was attended by representatives of the business community, political and public figures, diplomats and experts. In particular, in the plenary session, in addition to the head of Rosneft, took part the head of BP Robert Dudley, President of the Foundation for international cooperation, the former head of the Council of Ministers of Italy Romano Prodi, Glencore Chief Executive Officer Ivan Glasenberg, Trafigura Chief Executive Officer Jeremy Weir and managing Director of the Eastern Committee of German Economy Michael Harms..

Igor Sechin began his speech with today’s most pressing issue – trade restrictions and sanctions that have broadly become a tool for the USA to fight for the share of key global markets. «The modern phenomenon of «sanctions» is yet to be closely studied. As of today, they vary so much and progress so fast that they have become something else. The analysis of reasons for introducing sanctions allows us to conclude that, in fact, their use is rather a tool for putting pressure on certain countries in order to make them change their internal or foreign policies in unilateral interests, than a measure of responsibility under international law against economic entities», – the head of Rosneft noted.

«In my opinion, what we see is not sanctions, but «trade wars» with intentionally blurred, often ambiguous phrasing. Their arbitrary use has become apparent to everyone», – Igor Sechin said. According to him, about a third of the world’s oil reserves and a fifth of global output have already been subjected to unilateral restrictions, which is a definite anti-record.

Sanctions introduced without the necessary decisions of the UN Security Council have turned into a mundane tool effectively lying in the hands of a single country, while not just certain market participants, but whole countries are «hostages» of the situation. «In such circumstances there is no place for equal dialogue, and the only advice that I can give to our partners is be ready for the dictate, the result of the policy of unilateral sanctions will be the loss of sovereignty and control over economic and energy policy by many market participants», – Igor Sechin said.

Only 0.6% of losses caused by the sanctions against Russia falls on the USA, while Germany accounts for as much as 40%. As the head of Rosneft noted in his speech, refusal of all European companies to work with Iranian partners that is being discussed at the moment may have serious consequences for the European economy. «The sanctions rhetoric negatively affects financial markets as well, impeding capital flow and increasing the cost of attracting investment. That could have been one of the reasons behind the replacement of a long-awaited IPO of Saudi Aramco for a deal to acquire the Saudi petrochemical company SABIC», – Sechin said.

Unbalancing of the oil market

In short term already, the US «trade wars» may entail a significant unbalancing of the oil market, Igor Sechin thinks. «Current demand and supply of liquid hydrocarbons at the global market are roughly balanced at the level of about 100 million barrels per day. However, one cannot call sustaining stability and balance a long-term trend, as there has not yet been created a tool for ensuring such stability at the oil market», – he noted.

«Apparently, the United States has its own vision of its role in this process, and is pleased to grow into the role of a regulator of the world oil market in accordance with methods of work quite far from market practices and following its own interests that are pretty far from being altruistic,» – the head of Rosneft noted. Considering that OPEC has decreased its share of the global oil market for the benefit of the US shale industry, we can talk now of the emergence of US-PEC structure.

In his opinion, current amount of spare capacity has reached the decade’s minimum, and there is a direct threat that it will not be able to compensate for the production capacity eliminated mainly due to the fault of the US administration. «Any additional external negative event (and the history of the industry shows that we cannot exclude its possibility) can lead to a new sharp rise in oil prices, which will increase risks to the world economy and put an end to the current decade’s cycle of economic growth», – Sechin warned.

In the last 30 years, the barrier-free world trade volumes have increased by 65% to $18.3 trillion, contributing to global economic growth. However, current actions of the USA, as the head of Rosneft pointed out, demonstrate a clear course aimed at supporting home market with the use of protectionist measures and sanctions. According to the estimates of the leading global economists, trade wars will cost the global GDP 0.5%-0.8% that is about $400-700 billion a year.

«In fact, we can state that the same country, which was the driver of the world economy, has become its drag», – Igor Sechin said.

«I am convinced that the mutually beneficial win-win ties will continue to develop; while any further escalation of sanctions will ironically set limits for the USA themselves. They will become less reliable and equality-oriented partner and thus lose the trust of other countries, given their one-sided refusal to comply with the international legal standards, their unwillingness to comply with rulings of international institutions, their defiant withdrawal from agreements if not revised to their benefit otherwise. The loss of trust in the USA is another sign that the rest of the world, that is over 95% of people, is looking for a replacement of the established model. I believe that we need a system of a mutual discussion based upon trust and respect», – oil company’s CEO said.

Unfulfilled demand in the future

The current level of oil prices is comfortable for the Company and, in general, largely represents the existing balance of supply and demand, Sechin noted.

Speaking about market prospects, the head of Rosneft once again warned market participants against excessive optimism regarding the prospects of electric cars. In the foreseeable future, oil and gas will remain the core of the global energy and economy, with the main challenge for the coming decades still being the mobilization of the new resources to replenish up to 40 million barrels per day of retiring production capacities by 2040.

At the same time, the idea of further shale production growth should not be relied upon, said the head of the Company, as it is closely associated with technical and technological difficulties and will not be able to compensate for the natural decline in production from traditional projects.

The decline of industry investments due to falling oil prices in 2014-2017 will have serious consequences for the industry. However, Rosneft, unlike other companies, continued to actively invest in exploration and production during this period. «We actually had a 50% growth in dollar terms – from $9.2 billion in 2014 to $13.7 billion in 2017. As a result, in the coming 18 months we are launching over 7 new world-class greenfield projects proving once again our compliance to sustainable supplying of the world market»,-  Sechin said.

The environmental awareness will be among the priorities in the development of the Company in the coming years. Igor Sechin has voiced a new point for Rosneft, according to which the Company seriously intends to take a leading position in the global industry for environmental business.

Even today, Rosneft is distinguished by low greenhouse gas emissions among its competitors, which is, according to Bloomberg, already lower than many of the world’s major industry players (Total, Chevron and Petrobas). «Our strategic goal is to reach the first quartile among international companies comparable in terms of greenhouse gas emissions by 2022», – the head of Rosneft said.

Rosneft resource base and projects are now among the best in the world in terms of direct operating and capital costs and significantly exceed the corresponding US oil industry indicators.

«Misunderstanding of these factors led to recent statements of some of my colleagues about Russian perspectives, who claimed that in 10-15 years Russia will leave the world oil arena. Of course, nothing like this is going to happen. According to our evaluations, three of today major players will lead the world in such perspective – Saudi Arabia, Russia and USA – countries with very different industry organization, different resource base and different growth drivers», – said Sechin.

Despite market volatility and restrictions, including those of a sanction origin, Rosneft remains the driving force of the development of pan-Eurasian partnership relations, implementing the vision of an «economy of trust».

Along with success on its key market in Russia, Rosneft has shown advanced results on a number of overseas projects. Joint project with Eni for the development of the Zohr field is being successfully implemented, joint projects on the shelf of Mozambique with Exxon Mobil have great perspectives. British BP, the shareholder and long-term business partner of Rosneft, is considering the possibility of joining a number of new projects in Russia. Preparations are under way for the development of the North-Veninsky gas-condensate field (Sakhalin-3 project) with the participation of chinese Sinopec, possibility of further expanding cooperation on a number of projects with indian ONGC is being considered. Additionally, development of joint projects with the norwegian Equinor, PetroVietnam, activities in the German oil refining market also continues.

Igor Sechin concluded his speech by stating that the company has many opportunities for mutually beneficial cooperation, and invited all participants of the panel session to the St. Petersburg International Economic Forum in 2019.

«We are ready to expand partnership in all spheres of our business and, as before, we will seek new sources of synergy to benefit both the final consumer and the producers themselves», – the head of Rosneft summed up.

Other participants on the discussion also supported the position of the head of Rosneft. In particular, European countries may appear the main victims of the US sanctions policy, according to Romano Prodi. The current dynamics of European trade market testifies to the fact that Europe is moving towards self-isolation, said former head of the Council of Ministers of Italy. But, while other market participants to some extent can compensate the costs of imposing sanctions (Russia due to a turn to the East, and the United States due to protectionism), Europe essentially does not have such an opportunity.

Robert Dudley, in turn, emphasized that the oil markets under sanctions state creates risks for the global economy. The sanctions issue requires a speedy decision, BP head said he is sure. This opinion is shared by Prof. Antonio Fallico, Chairman of the Board of Directors of Intesa Bank. He summarized the discussion, saying that he would appeal to the government and people of Italy not to support the mechanical extension of sanctions in December.