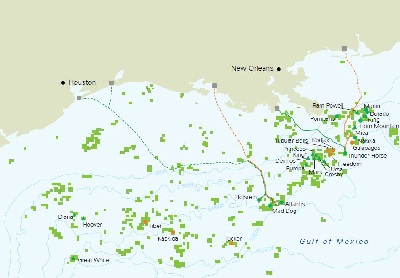 11/04/2018
Author: Ilham Shaban
Views: 188
Total has acquired several assets located in the Gulf of Mexico as part of the Cobalt International Energy company’s bankruptcy auction sale. Total submitted offers on several assets for a consideration of approximately 300 million dollars and acquires from Cobalt:

On April 5, 2018, the United States Bankruptcy Court approved these results.
“The sale of Cobalt’s assets gives us the opportunity to further enhance our portfolio in the Gulf of Mexico under particularly attractive conditions and to be able to apply our expertise as a deep offshore operator. We will now develop the North Platte discovery, looking for the most efficient scheme in terms of development cost”, stated Arnaud Breuillac, President Exploration & Production at Total.
Discovered in 2012 by Total and Cobalt in the Wilcox play, North Platte covers four blocks of the Garden Banks area, 275 kilometers off the coast of Louisiana in approximately 1,300 meters of water. The field is now fully appraised with a total of three wells and three sidetracks.
Discovered in 2014, Anchor is also located in the Wilcox play, 225 kilometers off the coast of Louisiana in approximately 1,500 meters of water. It is one of the most significant recent discoveries in the GoM. Anchor is operated by Chevron (55%) alongside Total (32.5%), and Venari (12.5%).
Total Exploration & Production in the United States
Total has been active in Exploration & Production in the United States since 1957. In 2017, the Group’s production in the country was 123,000 barrels of oil equivalent per day.
In the Gulf of Mexico, Total focuses on the deep-water domain. In addition to North Platte and Anchor, the Group holds working interests in three producing fields, Jack with 25% and Tahiti with 17%, both operated by Chevron, and Chinook with 33.33%, operated by Petrobras. Last January, it also announced the major Ballymore discovery (Total 40%, Chevron 60% operator), located in the Norphlet play, following an exploration agreement signed with Chevron on September 2017. Total also holds participations in over 160 exploration leases.
Onshore, Total operates about 100,000 barrels of oil equivalent per day (shale gas production) in the Barnett play (Total 100%, operator) and is a 25% participant in a JV operated by Chesapeake in the Utica shale play.
Total.com