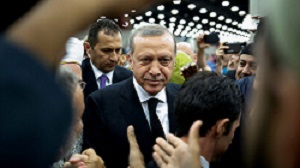 Turkish President said that this is the agreement on equal funding of the project. Turkey “has offered to divide costs for construction of the section of the pipeline,” which will pass through Turkey.

On August 9, 2016 Vladimir Putin and Rejep Tayyip Erdogan have agreed at the talks in Saint Petersburg to accelerate implementation of two key energy projects, including construction of the Turkish Stream. During the talks the sides have also decided to create a special working group and the road map of the project.

The sides have been talking about construction of one branch of the gas pipeline, via which Turkey will receive Russian gas for its own needs. The length of the offshore section must be about 910 km, while onshore section via the territory of Turkey – 85 km. According to Gazprom, cost of the gas pipeline branch is 4.3 billion Euro, reported rbc.ru.