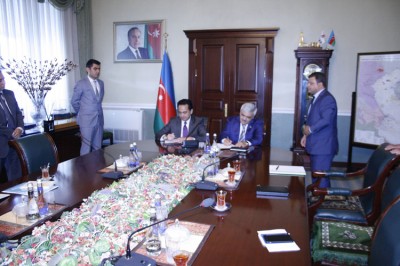 Malaysian Petronas company is interested in deepening of cooperation with SOCAR, reported SOCAR.

Abdullayev added that there are great perspectives for development of cooperation between SOCAR and Petronas in the Azerbaijan oil and gas industry and added that the country guarantees absolute safety of investments.

SOCAR President has also provided detailed information about the course of implementation of the Shah Deniz Phase 2 and creation of the Southern Gas Corridor project. He added that the works on these projects goes on schedule and we are confident that the first gas deliveries to Turkey will begin in 2018.

At the meeting the sides have signed addendum to the memorandum on mutual understanding of cooperation between SOCAR and Petronas.

* In Azerbaijan Petronas is the shareholder of the Shah Deniz field development project with 15.5% share, South Caucasian gas pipeline with 15.5% and also the shareholder of Azerbaijan Gas Supply Company with 12.4% share. This has become possible after purchase of shares in these projects from the Norwegian Statoil company. The deal was announced on October 13, 2014 and closed on April 31, 2015.