The E.U. is the only major economy showing steady declines in natural gas demand

Demand for natural gas has been growing around the world, albeit at a slower pace than many had hoped, but the European market has actually show a decline in natural gas demand since 2010. All other major gas consuming countries have shown increases in demand going back to 1990, but demand from the E.U. has declined 22% since 2010, according to a recent note from Raymond James.

Looking at data from BP’s Statistical Survey of World Energy, Raymond James found that demand for natural gas has grown 6% worldwide since 2010, but if the E.U. is excluded from the dataset, then demand has increased by 11%, making the E.U. the main “brake” on global demand growth. The E.U. consumed 37.8 Bcf/d of natural gas in 2014, its lowest levels since 1995.

This has led to a curious sort of gas-independence, however, Raymond James notes. While natural gas production has been steadily declining along with demand, it has done so at a slower rate, reducing the E.U.’s need for imports. Gas imports have become a major energy policy concern in the E.U. as Western Europe tries to reduce its dependence on Russian gas as political relations between the two worsen. 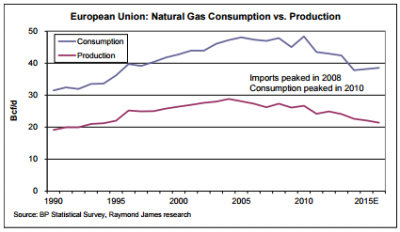 While demand in Europe declines, other major economies continue to consume growing quantities of natural gas. U.S. and Canadian demand has grown 11% since 2010; China has seen demand boom 67%, and many mid-sized economies, including Colombia, Turkey, Egypt and Thailand, are also in the market for more or the abundant resource. Russian demand has stayed relatively stable, but the country consumed more gas than the entire E.U. in 2014 despite having less than one-third of the population.

Numerous reasons are behind the unusual decline in Europe’s natural gas demand, according to Raymond James. High costs for clean-burning natural gas make purchasing coal and the required carbon emissions credits cheaper in some parts of Europe, leading to a slight increase in demand for coal. Renewable energy, particularly solar and wind, are making up an increasingly large portion of Europe’s energy mix as well.

While sluggish economic growth certainly plays a role in lower natural gas demand, particularly in the industrial sector, Raymond James says this might be one European problem that should not be attributed to Greece. Demand in the troubled Mediterranean country has actually been quite stable while demand in the U.K. has fallen off by 29% since 2010.

This trend is likely to continue, according to the Raymond James note, which agrees with the International Energy Agency (IEA) that demand is unlikely to recover in the medium-term (five to 10 years). Some short-term gains are likely, but the move towards greater proliferation of renewable energy, along with the general expense of natural gas compared to other fuel sources like coal, and an anemic economy paint a bearish picture for natural gas in Europe.