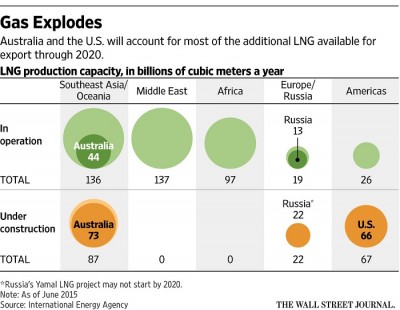 As billions of dollars of investment continues to flow into natural-gas production and exports globally, there are signs that supplies of the energy source have already caught up with demand.

Prices of liquefied natural gas—fuel supercooled to change it into liquid form for transport—have fallen to record lows in Asia this year, enabling buyers to drive a harder bargain in contract negotiations. With the U.S. due to start shipping LNG later in 2015, concerns about potential future shortages of gas have dissipated, at least for the near term.

“Global LNG balances are easing fast,” shifting the market’s concerns from how demand can be met to how supplies can be absorbed, the International Energy Agency said in its latest medium-term gas report. The shift, it said, “will shape LNG markets over the next few years.”

In the spot market, Asian LNG prices fell below $7 a million British thermal units in May, a level not seen since before the Fukushima disaster forced Japan to take its nuclear power plants off line in March 2011. The price is roughly one-third of the peak level of $20 a million BTUs last year.

Gas for July delivery on the New York Mercantile Exchange closed at $2.89 a million BTUs on Monday.

A total of 164 billion cubic meters of additional LNG export capacity will be operational globally by 2020, adding 40% to current levels, the IEA forecasts. Australia will add 44% of the new supply, becoming the world’s largest LNG exporter by the end of the decade. The U.S. will be the second-largest contributor, adding 35% of the new capacity, ranking third as an exporter behind Australia and Qatar.

As the gas gushes, Asia’s LNG market is being transformed

After Fukushima, Japan imported huge quantities of LNG to produce electricity. Asian LNG prices rose so much that cargoes from as far away as Europe were redirected to the region in the following years.

But since prices fell in the fourth quarter of last year, no tanker loaded with LNG has made its way to Asia from Europe.

Contract terms for LNG buyers are changing, too. Until recently, LNG was mostly supplied under rigid conditions set out by major gas companies. Buyers would typically have to commit to 20-year contracts, at a formula linked to oil prices, with conditions such as bans on reselling cargoes that were enforced even after a shipment had left port.

As market dynamics have changed in buyers’ favor, they are opting for shorter-term contracts, sometimes for as little as one year. Pricing arrangements are becoming more flexible, too.

Prices at the Henry Hub, a storage and delivery point in Louisiana, are considered the benchmark for all U.S. natural-gas pricing.

“There’s absolutely no reason now for LNG to be indexed to oil. It’s mature enough to be a product in its own right,” said David Morris, head of Asian LNG Business at E.ON Global Commodities.

Stagnant demand in Asia is also driving change. Japan’s nuclear reactors are slowly restarting, South Korea has large stockpiles of LNG, and China has access to cheaper gas via pipelines from places such as Turkmenistan. Consumers in these countries are seeking better terms on existing contracts.

“Asian buyers are in a strong position to negotiate for further concessions,” said analysts at BMI Research in a note.

Increased gas exports from North America are set to add to supplies, bringing a new level of competition to the market. The U.S. Energy Department has granted approvals to 10 projects to ship gas to countries that don’t have free-trade agreements with the U.S., giving those exporters access to major markets such as China and Japan.

Four of them are under construction, and one is expected to begin exporting later this year.

U.S. LNG exporters have said they would allow buyers to resell cargoes in the spot market, giving them the opportunity to trade the gas. That contrasts with major producers such as Qatar, which demand that gas be delivered to a specified location.

Already, buyers in China, Japan and South Korea are using the prospect of LNG shipments from the U.S. as leverage in seeking lower prices and better terms from sellers such as Russia.

“The Chinese are likely to be looking to squeeze an even better price out of the Russians than would otherwise have been the case,” said Alastair Newton, a senior political analyst at Nomura International. “That’s what free market economics are about, after all,”- reported http://www.wsj.com.