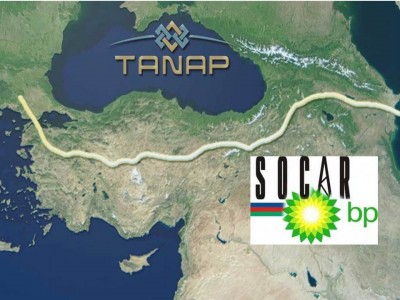 The Trans-AnatolianNatural GasPipeline (TANAP) project expects BP to resolve outstanding issues soon to become a stakeholder in the multi-billion dollar project that aims to reduce Europe’s reliance on Russian gas, a TANAP official said on Wednesday.

Magsud Mammad, the TANAP external relations director, told Reuters on the sidelines of an energy summit in Montenegro’s coastal resort of Budva that talks with BP, which said in 2013 it wanted a 12 percent stake in the project, were ongoing.

“The agreement is still pending,” Mammad said. “It is all about technical problems which should be resolved soon. We have certain technical differences but I don’t think there’s going to be a pull out by BP,” he said.

Azeri firm SOCAR holds a 58 percent stake in TANAP while Turkish pipeline firm Botas raised its stake to 30 percent from 20 percent in 2014.

TANAP envisages carrying 16 billion cubic metres (bcm) of gas a year from Azerbaijan’s Shah Deniz II field in the Caspian Sea, one of the world’s largest gas fields, which is being developed by a BP-led consortium.

The pipeline will run from the Turkish-Georgian border to Turkey’s border with Bulgaria and Greece. The preliminary cost of the pipeline has been estimated at $10-$11 billion.

Mammad said the project would be inaugurated on March 17, while its construction would start in April. It is expected to be completed by the end of 2018 in order to start deliveries of gas from Shah Deniz II to Europe in 2019.

The Balkan states hope to benefit from the TANAP project, which could connect to the Trans-Adriatic Pipeline (TAP) that will bring gas to Europe via Italy, through Albania.

Croatia, Montenegro and Bosnia joined Albania in backing TAP because they want to build the Ionian-Adriatic Pipeline (IAP) from TAP’s landing point in Albania to supply them with gas as they mainly rely on Russian imports. Montenegro and Albania are not connected to a gas grid.

“There is a political will and we need to gather investors and pursue the project in parallel with TANAP,” Montenegro’s Economy Minister Vladimir Kavaric said in Budva. The cost to build the link was put at around 700 million euros, he added.