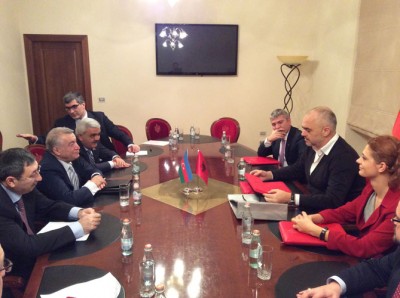 Baku and Tirana signed a memorandum of understanding on cooperation in the development of a master plan for Albania’s gasification, SOCAR (State Oil Company of Azerbaijan) reported Dec.19.

The memorandum was signed as part of the Azerbaijani delegation’s visit to Albania, which included Minister of Energy Natig Aliyev, Deputy Foreign Minister Khalaf Khalafov, head of SOCAR Rovnag Abdullayev, the statement says.

The members of the Azerbaijani delegation have today met with Prime Minister of Albania Edi Rama, Speaker Ilir Meta and Minister of Industry and Energy Damian Gjiknuri.

Albania is one of the European countries, which will receive Azerbaijani gas within the Southern Gas Corridor.

The Southern Gas Corridor will allow Europe to diversify its hydrocarbon supply sources and strengthen energy security and also will allow Azerbaijan to obtain a new market in Europe.