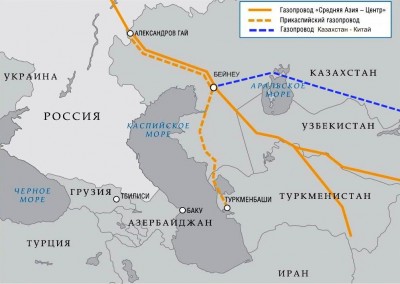 “In the near future the company is going to fully stop gas purchases from Turkmenistan and Uzbekistan, but it has to terminate the intergovernmental agreements, which reinforce these contracts. The work on termination of the agreements is in progress,” said a source from Gasprom.

A source from the Fuel and Energy Department of the Uzbekistan Cabinet of Ministers told RIA Novosti that Tashkent continues reducing natural gas deliveries to Russia compensating them by increase in deliveries to the Chinese market.

By 2021 the main export direction of Uzbek gas will be China, said a source from the Agency. He said in 2015 the deliveries to China will be increased up to 10 billion cub.m. against 6 billion cub.m. in 2013. “There are resources to increase this volume,” said the same source.

Since 2011 Gasprom has imported 10 billion cub.m. of gas a year from Turkmenistan.