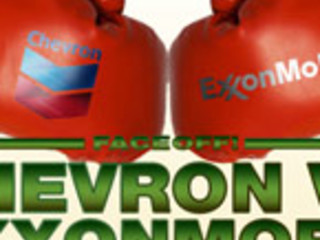 Choosing between ExxonMobil and Chevron can be a tough task for investors.

On one hand, as one of the largest publicly traded companies in the world, Exxon is unlikely to disappear anytime soon and is seeking stability of earnings. On the other, Chevron is seeking rapid growth over the next few years, which could go horribly wrong if the price of oil collapses.

However, dig through the numbers and it becomes clear that while Exxon is the bigger company, Chevron is much more successful.

The lucky one
Chevron has had plenty of success all over the world, and the company has been proactive in ensuring that its size does not affect profitability.

Chevron is able to squeeze more earnings out of every barrel of oil produced than any of its peers. This is not just luck, either; Chevron’s management has sought out lucrative oil projects with high margins and LNG production sold on oil-linked contacts.

Chevron has also had better investment opportunities. The company’s exploration program has been highly successful in the Gulf of Mexico, generating a flow of lucrative discoveries. These include the Jack/St Malo and Big Foot fields.

The Jack/St Malo development involves drilling 43 subsea wells. When in full production, the facility will have a capacity of 170,000 bpd of oil and 42.5 mmcf per day of natural gas. Big Foot has a potential production capacity of 75,000 barrels of oil.

More cautious
ExxonMobil, on the other hand, is being much more cautious in its investment and development selection. Exxon is looking for quality and sustainability, so it would rather develop a project that could produce 10,000 barrels a day for 30 years than 100,000 barrels per day for five years. Of course, the company is still looking to make a solid return on its investments as well.

Exxon is also prepared to wait. The company believes that we are heading toward an era of oil “abundance” as technical advances allow companies to unlock oil reserves around the world.

However, despite Exxon’s and Chevron’s differing levels of success, both companies are focused on the development of domestic shale oil properties.

Domestic shale
This is somewhat of a departure from tradition for both companies. Chevron is a specialist in offshore deepwater drilling, while Exxon is more specialized in huge multi-billion dollar projects with decades-long life spans.

Further, onshore shale developments are more gradual in nature than traditional offshore projects. Onshore developments usually require the drilling of several wells, with each well only taking a few days to drill and revenues from the well dropping off quickly.

A continual stream of new wells needs to be drilled in order to sustain production. In comparison, large offshore projects usually take years to develop but the payoff is sudden and long term.

Aggressive plans
When it comes to domestic shale opportunities, Exxon was given somewhat of a head start over Chevron. Exxon dove into the industry in 2010 by buying XTO Energy, a shale producer. XTO was mainly a gas producer, however, so Exxon has had to shift its focus.

Nevertheless, Exxon is now drilling in the Bakken, in Oklahoma, and in the Permian basin. The company was producing 85,000 boe/d from these regions in 2010, but management is targeting output of 225,000 boe/d by 2017.

Meanwhile, Chevron is focusing on the Permian basin. Chevron’s Permian production last year touched 135,000 boe/d, and the company has aggressive plans for expansion just like Exxon. Regional production is expected to hit 250,000 boe/d by 2020; this is a slower ramp up than that of Exxon, but Chevron has plenty of other projects around the world to dig its teeth into.

The bottom line
The bottom line is that Chevron is a more efficient oil company than ExxonMobil. Chevron has made some impressive discoveries during the past few years and the company has kept its costs low, giving it the widest profit margins per barrel of its peers.

ExxonMobil still has its attractive qualities, but Chevron is making rapid progress even though it is the smaller of the two. It could only be a matter of time before Chevron overtakes its larger peer.

Do you know this energy tax “loophole”?
You already know record oil and natural gas production is changing the lives of millions of Americans. But what you probably haven’t heard is that the IRS is encouraging investors to support our growing energy renaissance, offering you a tax loophole to invest in some of America’s greatest energy companies. Take advantage of this profitable opportunity by grabbing your brand-new special report, “The IRS Is Daring You to Make This Investment Now!,” and you’ll learn about the simple strategy to take advantage of a little-known IRS rule. Don’t miss out on advice that could help you cut taxes for decades to come. Click here to learn more.

Rupert Hargreaves owns shares of Chevron. The Motley Fool recommends Chevron. Try any of our Foolish newsletter services free for 30 days. We Fools may not all hold the same opinions, but we all believe that considering a diverse range of insights makes us better investors. The Motley Fool has a disclosure policy.