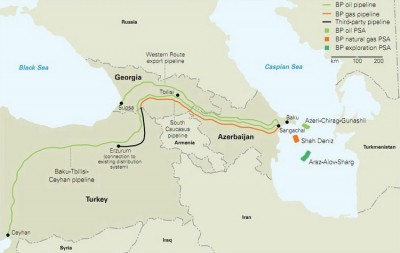 The main export route for Azerbaijani oil transportation is the Baku-Tbilisi-Ceyhan (BTC) pipeline. Oil is supplied to the Turkish port of Ceyhan via this pipeline.

Azerbaijan’s Azeri Light is also exported from Georgia’s port of Supsa. It is supplied there via the Baku-Supsa pipeline.

Oil is also exported from Georgia’s Black Sea port of Batumi. It is transported there by rail from Baku and from the Novorossiysk port via the Baku-Novorossiysk pipeline.