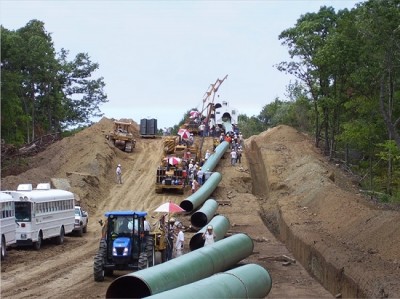 The contract for pipeline construction in Azerbaijan and Georgia has been awarded to Saipem/Azfen which is a joint venture between Saipem Contracting Netherlands BV and Azfen JV.

The scope of work for this contract includes:

Construction of a 428 km pipeline loop and associated above ground installations, including block valves, a pigging facility and tie-ins in Azerbaijan and Georgia.

Construction of a 59 km second pipeline loop and associated above ground installations in Georgia.

The value of this contract is $735 million and it marks a major step forward towards commencement of SCPX construction activities. The start of work is scheduled for January 2015 with mechanical completion of the Georgian section expected by the end of 2016 and the Azerbaijan section by the end of 2017.

“We are pleased that both Shah Deniz phase 2  and SCPX projects are moving ahead across all areas.  Work has commenced at the fabrication yards for jackets and decks, as well as at the onshore terminal construction sites. Offshore, drilling activities continue successfully using the Istiglal and Heydar Aliyev rigs with five production wells already completed in preparation for first gas in late 2018”.