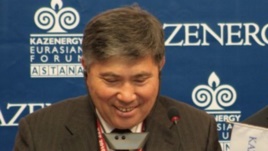 Kazakhstan is considering alternative routes for its oil exports fearing that Western sanctions against Russia over the situation in Ukraine might affect the country’s energy sector.

Kazakh Minister of Oil and Gas Uzaqbai Qarabalin told lawmakers on April 7 that sanctions might lead to a decrease in the oil volume transported by Astana to external markets via Russian pipelines.

Qarabalin said Astana will have to focus on the Azerbaijan-Georgia-Turkey route via the Caspian Sea.

He added that Iran can be considered as a possible partner as well.

According to Qarabalin, Astana will try to increase its oil exports to China, Uzbekistan, and Turkmenistan in near future.

He also said that Western sanctions might lead to an increase of exports of Russian oil products to Kazakhstan, which may affect Kazakhstan’s gasoline market and local refineries’ operations.