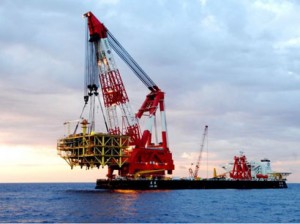 State Oil Company of Azerbaijan (SOCAR) is working on the new stationary offshore platform for Banka Darvina field in the Azerbaijani sector of the Caspian Sea, reported SOCAR.

The works are carried out by SOCAR’s Design Institute. The new platform will be able to drill 10 wells and will be located on the depth of 9-9.5 metres.

According to the forecasts, the daily production rate of each well is 50 tons of oil. The new platform, which will consist of eight blocs, will be equipped with the most modern equipment.

SOCAR has earlier worked out the program for stabilization and increase in oil production on the fields developed by the company independently for the period between 2013 and 2015.