As part of Azerbaijani President Ilham Aliyev’s official visit to Russia, the State Oil Company of Azerbaijan (SOCAR), Gazprombank JSC and Russian Export Center signed an agreement on strategic cooperation for the purpose of effective implementation of future protects in the sphere of supporting exports from the Russian Federation. 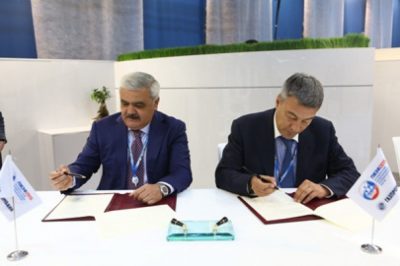 Report informs that at the ceremony held with participation of President of Azerbaijan Ilham Aliyev and President of Russia Vladimir Putin the document was signed by Board chairman of Gazprom JSC Andrey Akimov, SOCAR President Rovnag Abdullayev and General Director of the Russian Export Center Andrey Stepnov.

The goal of the agreement is to develop the long-term effective and favorable cooperation to support the export of Russian-made equipment, as well as works and services to meet the needs of the projects implemented by SOCAR.

In line with the agreement, in the direction of provision of banking services by Gazprombank, as well as modernizing the production facilities and sale and purchase of industrial equipment, the potential financing of the current and investment activity implemented by the company is envisaged. In addition, as part of the document the Russian Export Center plans to present the insurance deposit to the Russian commercial banks financing the supply of the Russian-made equipment, as well as the works and services of Russian subcontractors and confirms the readiness to investigate the issue of subsidizing the interest rates on loans issued by the Russian commercial banks.

Chairman of Gazprombank’s Board Andrey Akimov noted: “The signed document confirms the long-term, strategic and favorable cooperation between the Gazprombank Group and the SOCAR Group. Today, Gazprombank is exploring the possibility of allocating US$ 700 million to the Russian Export Center for the supply of Russian-made products to SOCAR’s GPC gas-chemistry complex within the programs of state support, which represents a bright example of how to use Gazprombak’s financial and technologies capabilities as part of the largest industrial projects.”