A blowout occurs at Rag-Sefid offshore oilfield in Iran’s southwestern Khuzestan Province on October 29. The accident happened when drilling operation was ongoing in depth of 2,403 meters in the well No. 147 of the field. It burnt the drilling rig and killed two persons working for the National Iranian Drilling Company (NIDC). 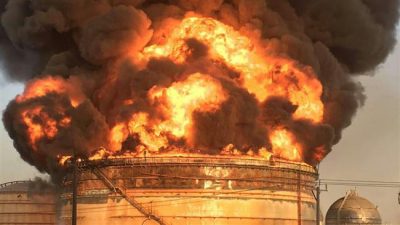 One week after the blowout, Iranian Oil Minister Bijan Namdar Zanganeh said that the blaze would be brought under control within one and half month, but the well is still burning after 58 days.

Although, Iran has the experience of controlling such accidents in the oil and gas fields, as the country has brought 12 blowouts under control over the past 12 years, this one is a rare case given the high pressure of the oil exiting from the well.

Many oil officials, including Ramin Hatami, the managing director of Iranian Central Oil Fields Company (ICOFC), believe that considering its high experience in controlling the burning wells, Iran has no need for help from outside to bring Rag-Sefid under control.

For controlling the blaze in this well, Iran has conducted the two main methods of well killing (putting out oil well fire), i.e. top killing and bottom killing, and says that big jobs have been done in this due.

For conducting top killing operation, water was poured on the deadly blaze from ten sides. A very large pool has been dug in 150 meters distance from the well and five pipelines have been built to transfer water from different spots to this pool. Given that Rag-Sefid is located in a mountainous area and the ground is very hard in that region, digging this pool was a difficult job and took 14 days. And for conducting bottom killing operation, two wells were dug near the burning well.

Bijan Alipour, the managing director of National Iranian South Oil Company (NISOC), says that bringing Rag-Sefid under control is one of the most difficult operations for controlling an offshore well and underlines that digging the mentioned pool and laying 250 kilometers pipeline to bring water to it during 10 days, also digging the two wells near the burning well during 11 days are two records in the country’s history of controlling such blowouts.