Azerbaijani President Ilham Aliyev ordered Dec. 22 to transfer a number of facilities of the State Agency for Alternative and Renewable Energy Sources to the balance of Azerishig OJSC (state monopolist for the distribution of electricity in Azerbaijan). 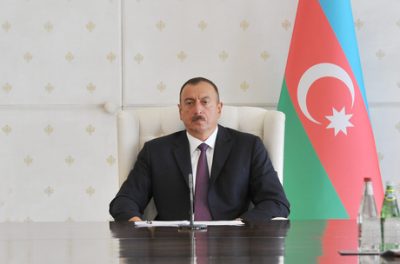 Such instructions are envisaged by the order of the Azerbaijani President on additional measures in the sphere of using alternative and renewable energy sources.

In addition, Azerishig will be allocated 10 million manat to increase its authorized capital. These funds will be allocated from the state budget for 2017 and are aimed at reconstruction of the wind power parks transferred to the balance of Azerishig, the creation of their material and resource base, and the formation of human resources taking into account international experience and other necessary work.

The President also instructed the Cabinet of Ministers, together with the Ministry of Energy, to prepare and submit the reform measures planned for the country’s energy sector to the head of state in two months.

* The share of wind energy in Azerbaijan’s energy balance is scanty – according to the latest statistical data, in the first 11 months of 2017, Azerbaijan produced 20 577.9 million kWh of electricity, of which 11.3 million kWh accounted for wind energy (compared with the same period last year, a decrease of 29.4%).

In Azerbaijan, the State Agency for Alternative and Renewable Energy was established in 2009. This department actually started producing electricity from 2014. Over the years, the Agency did not have a clear vision on the development of this industry in the country. The Agency’s leadership assured the government that by 2020 it will fulfill its obligations on achieving the share of alternative energy to 20%. However, to achieve this goal, the Agency’s representatives took into account the design calculations of all operating and projected hydroelectric power plants, including the largest ones, although alternative energy includes only mini-HPPs.

Therefore, the current orders of the President can be considered in two contexts: from 2018 in Azerbaijan it is planned to seriously engage in the production of electricity received from alternative sources. In addition, the status of the Ministry of Energy is growing – it will turn into a serious structure, which will henceforth be given the role of the controlling body in the energy and gas sectors. That is, the Ministry of Energy will already be engaged in the policy of pricing natural gas and electricity for consumers. Truly, the Presidential Decree does not emphasize that these functions are taken away from the Tariff Council under the Cabinet of Ministers. However, the document provides for the beginning of reforms in the energy sector of Azerbaijan.