The national holding company Uzbekneftegaz and Russian Gazprom signed an agreement on strategic cooperation between the two companies. 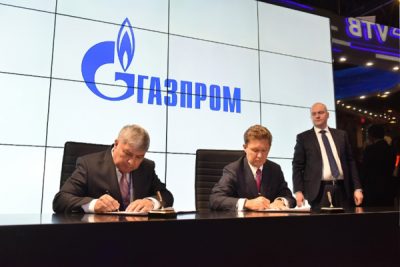 The parties jointly will carry out geological prospecting, extraction, processing and storage of hydrocarbons and etc.

Earlier this March, Uzbek President Shavkat Mirziyoyev and Gaprom Head Alexei Miller discussed promising projects for further expansion of mutually beneficial cooperation in developing the oil and gas complex of Uzbekistan, including within the framework of the adopted program to increase hydrocarbon production for 2017-2021.

According to official data, Gazprom is already actively involved in the implementation of large projects to conduct geological exploration and development of promising hydrocarbon fields in Uzbekistan, as well as in the export of natural gas. In partnership with the Russian company, large-scale geological exploration was carried out at Ustyurt (Karakalpakia), which resulted in the discovery of the Jel gas condensate field. The Shakhpakhty field is being jointly developed, and by now more than 3.5 Bcm of gas has been produced there.