The Trans-Adriatic pipeline (TAP) is at risk, which is part of the Southern Gas Corridor, due to delays in issuing permits by the local authorities in the Italian region of Puglia, Vitaly Baylarbayov, deputy Vice President of SOCAR, told EurActiv.com in an exclusive interview. 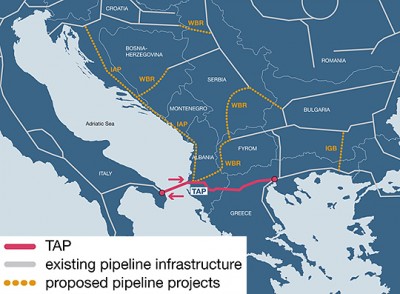 Vitaly Baylarbayov has been in charge of the Southern Gas Corridor, the only alternative project to bring gas to Europe from a source other than Russia, during the last eight years. He spoke to EurActiv.com’s Senior Editor, Georgi Gotev.

We met a year and a half ago. What’s new concerning SOCAR? Have the low prices of petrol have affected your activities?

Indeed, the changed market situation and especially the fallen and volatile prices impact on our activity, especially on our investment program. We no longer work with oil at $100 a barrel. It is between $40 and $50, and this makes our planning and our money flows more difficult. The company is reassessing its investment portfolio; it is cancelling certain projects from its 10-year program which are not of first priority.

But this hasn’t really impacted on the Southern gas corridor?

As regards the Southern Gas Corridor, all elements of the construction, upstream and downstream, are being implemented on schedule, and even ahead of schedule. More than 70% of the necessary work has been implemented in Azerbaijan and Georgia, which is ahead of schedule in the perspective of gas coming upstream in 2018. All investments, all relevant decisions, by the partners of Shah Deniz 2 (the offshore gas field in the Caspian from where the gas originates) and by all SOCAR partners are implemented on time, without any hurdles whatsoever.

Financing comes from SOCAR, by SOFAZ, the sovereign wealth fund of Azerbaijan. The government provides precious help by providing the guarantees when we use external financing. We try to enlarge the sources of external financing. Some projects have already received financing from EBRD, others are in the process of receiving similar financing. Here I refer to the entire chain, including investors in the upstream, such as Lukoil, in midstream, such as Turkey’ Botas company, (and) others. Currently 27, 000 people work on the project in Azerbaijan and Georgia, more than 6,000 in Turkey and over 2,000 already work on the territory of Greece and Albania.

We cannot report a similarly high number of personnel in Italy, and I think the reasons are obvious. Although we have completed the stage of project design and reached implementation, so far, all necessary permits have not been granted. Some of them could be released in a very short term, but their release is unfortunately delayed. This creates a risk for the realisation of the project. But from the federal government of Matteo Renzi, we have full support. We work with all regional authorities at all levels, aiming to finalise not only the project itself but the social community support program…

This is a kind of offset deal, a sweetener for the local communities?

Yes. But I need to stress that the risk of delay objectively exists, and this risk in no way prompts the enthusiasm of the project shareholders.

The federal government gave us the single authorisation decree in 2015. To this authorisation, 65 additional comments or additional authorisations which need to be granted by different Italian organisations were made. This is usually called “verification of compliance”. But 65 is a very big number. And a very minimal number of such authorisations have been granted so far.

What is the issue? Populist opposition?

I would rather say this is about lack of confidence in Puglia for the realisation of large industrial projects. And TAP is certainly a very big project, one of the largest private investment energy projects in Europe as we speak. And this is only TAP. I’m not speaking of the entire Southern Gas Corridor. Similar projects in Italy…

Like Poseidon indeed, and other projects in the vicinity of Brindisi. Such projects have been met with scepticism from society.  Obtaining the necessary authorisation sometimes takes ten years or more. The Poseidon project, known also as Edison’s project, is one example.  Of course it’s out of the question for us to wait 10 years, and we sincerely hope that Prime Minister Renzi’s government will be able to overcome this lack of confidence.

But let me tell you what this looks like. The pipe arriving from the sea crosses the coast underground and reaches surface eight kilometres further. This will be done by digging a micro-tunnel with the most modern equipment. What is important to understand is that TAP leaves no mark on the coast. We also are ready for a titanic effort to dig up and move some 2,000 olive trees of respectful age. They will be moved, together with their roots and with the soil, with special machines, and planted at another site, under the supervision of Italian scientists. They will spend two years there and then they will be returned back to their original location. Once again, the pipe will be underground. It will not be visible.

You spoke of populism. In my view, there is truth about using a project such as TAP for certain political goals. Even though the project is important for Italy, it is important for Europe. We are speaking of gas from an alternative source for Italy, for Southe Eastern Europe. So I think common sense will once again prevail. I would like to stress that environmental impact is minimal and all damage on the environment will be repaired. All losses for agricultural producers will be compensated. Social budgets in the regions will get a boost, as I explained. And once again, the projects are implemented under the most modern and I would say strictest standards. I think that nobody can stop progress.

What’s new with DESFA? It was recently announced that SOCAR had agreed to extend a letter of guarantee for its acquisition of Greek gas network operator DESFA by a month. Why do you hope to achieve in a month what was not possible to achieve in years?

I will say it like this. On the one hand, you are right. One month is not a long time. But on the other hand, both sides know the importance of the issue. So the objective is to find, in less than a month, a solution which would be good for both sides. We respect the Greek government effort to ensure the best conditions for the consumers of the DESFA network, be them industrial or private. At the same time, the Greek government made proof of its constructive attitude at this recent meeting, between SOCAR President Rovnag Abdullayev and Greek Prime Minister Alexis Tsipras. The prime minister said he was committed to seek, during this month, a solution acceptable to both sides.

What makes thing more difficult is that the methodology has changed, the rules of the game were changed, which impacts on the price of the company. So if we speak about SOCAR as the owner, (it) agreed to pay a certain price for the company. In the meantime, the price changed, moving in the wrong direction – it became smaller. If you project your revenues in perspective, if you evaluate what investment you can afford, you and reach different solutions. And many levers remain in the hands of the government to control the process. For obvious reasons, I don’t want to mention any of them. But I am sure that from the side of SOCAR, and also from the side of the Greek government, in accordance with the statements of the prime minister, a constructive approach will be followed. It is in the interest of both sides that the protracted process of privatisation of DESFA is successfully completed. We don’t guarantee, but we hope that the goal can be reached.

What adds optimism is that SOCAR is not alone in this process. We are together with the Italian company Snam. [Italy’s Snam is interested in acquiring 17% or maybe еven more of the 66% stake of the State Oil Company of Azerbaijan (SOCAR) in the DESFA Greek gas operator.] We will consult with them in the process of the negotiations. But let me honestly recognise that hard work lies ahead, in search of a compromise. The economy is a precise science, but there are limits to what you can do with numbers.