The Southern Gas Corridor, a project of pipelines to bring new gas supplies to Europe, is running on time and on budget, a BP senior executive said on Thursday. 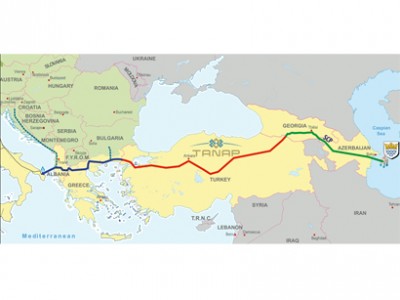 The Southern Gas Corridor consists of a chain of pipelines which will transport gas from the Shah Deniz field in Azerbaijan to European markets for the first time in history.

Around 10 billion cubic metres (bcm) per year of Azeri gas should reach Europe by 2020 at the latest via the Trans-Adriatic Pipeline as well as the South Caucasus Pipeline through Georgia and the Trans-Anatolian Pipeline (TANAP) through Turkey.

BP is developing the Shah Deniz II field and has stakes in the pipelines, along with other companies.

“We do see it as very scalable. It is a $45 billion project and we have already awarded contracts for about a third of that. It is moving ahead on time and on budget,” Peter Mather, BP’s UK country head and vice president of Europe, said at an event at the European Bank for Reconstruction and Development in London.

The first gas is expected to be transported to Turkey at the end of 2018, with supply to Europe expected by 2020.