Over 50 percent of the work on the “Shah Deniz-2” project has been finished, Azerbaijani Energy Minister Natig Aliyev told reporters Feb. 1. 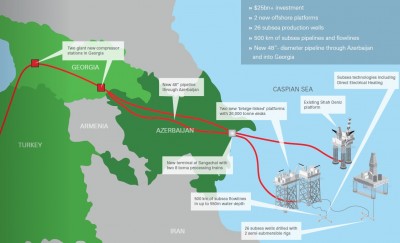 The gas to be produced as part of the Stage 2 of the Shah Deniz field’s development will be exported to Turkey and to the European markets by means of expanding the South Caucasus Pipeline and construction of the Trans-Anatolian Gas Pipeline (TANAP) and the Trans-Adriatic Pipeline (TAP).

Aliyev said that a lot of work on the expansion of the South Caucasus gas pipeline has also been done.

“Already over 20 percent of the pipeline has been built,” Aliyev said. “The construction of compressor stations in Georgia has started. We have repeatedly reported that the work is going ahead of schedule. The pipes delivery process for Trans-Anatolian Gas Pipeline (TANAP) has been completed, and welding works have started. This year it is planned to start construction of the Trans-Adriatic pipeline (TAP).”

TANAP project envisages transportation of gas of Azerbaijan’s Shah Deniz field from Georgian-Turkish border to the western borders of Turkey. The initial capacity of TANAP pipeline is expected to reach 16 billion cubic meters of gas per year. Around six billion cubic meters of this gas will be delivered to Turkey and the remaining volume will be supplied to Europe.

The 878 km TAP pipeline will transport Azerbaijani natural gas from the giant Shah Deniz II field through the last leg of the Southern Gas Corridor, connecting with the Trans Anatolian Pipeline at the Turkish-Greek border at Kipoi and then crossing Greece, Albania and the Adriatic Sea, before coming ashore in Southern Italy.

The minister went on to add that possible problems that may arise during the implementation of the project will be discussed at the Southern Gas Corridor Advisory Council meeting, which will be held soon.

The Southern Gas Corridor (SGC) is a priority project for the EU. It is designed to transport the Caspian region’s gas to Europe through Georgia and Turkey. At the initial stage, the gas to be extracted during the second phase of development at Azerbaijani gas condensate field Shah Deniz is considered to be the main source for the Southern Gas Corridor. At a later stage, other sources may join the project.