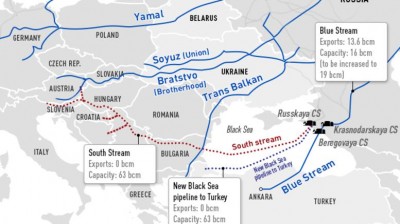 At last, having agreed with Turkey, which is not a EU member, Russia does not need to coordinate construction of the gas pipeline with the European Commission, as it happened in case of Bulgaria as a part of the South Stream project.

During the best years (for instance in 2011 when transit via Ukraine was 103 billion cub.m. and Russian gas import was 45 billion cub.m.) “fee for loyalty” of Ukraine from Russian gas transit and the discount for gas delivered into the country totaled about $7.8 billion a year, of which $3.6 billion was a transit fee and $4.2 billion was discount of the contract price of gas. However, during the past 10 years Russia managed to reduce dependence on Ukraine as a transit country by more than twice.

European Union keeps on counting on reduction on dependence on Russian gas at the expense of alternative supplies, first of all LNG. It stakes on the gas surplus, which could happen after breaking of the US and Australian LNG into the world market after 2016.

However, even with the current prices US LNG will cost about $300 per 1000 cub.m. in Europe and will not be competitive as compared to the pipeline gas from Russia, which is sold on the basis of the contracts with the oil index of the price, and other sources. In any case the priority for the US LNG remains the premium Asian market. The same is applied to the more expensive Australian gas, 80% of which is contracted in the ATP.

Scenarios of development of events

In 2014 transit of Russian gas to Europe through Ukraine totaled 59 billion cub.m. This means that in case of wide-scale implementation of the Turkish Stream with the volume of 63 billion cub.m. (similar to the planned South Stream), the scenario of turning of the Ukrainian transit pipe into the scrap metal is possible.

The first two branches of the Turkish Stream with a total capacity of 32 billion cub.m. will allow re-directing the contract volumes to Turkey, Bulgaria, Greece, Macedonia, Romania and Moldova, which are exported there through Ukraine with minimum modification of the existing transport infrastructure (in particular, the trans-Balkan gas pipeline will be reversed). With the volume of gas export to these countries at the level of year 2013 (totals the two contracted volumes of as) one can achieve almost 85% load of two branches of the Turkish Stream. Considering growing demand in gas in Turkey and in case of deliveries to Ukraine via this route, the load level could be even higher.

The third and fourth branches of the Turkish Stream are designed for gas supplies to Italy, Hungary, Austria, Serbia and Slovenia. Within the framework of the effective contracts, the main point of gas delivery to these countries is Baumgarten in Austria. Theoretically gas from the Turkish Stream could be delivered to Baumgarten from the Greek-Turkish border. In addition, the 3rd Energy Directive envisages construction of the required additional gas pipeline capacities by the European system operators in case of availability of the contracts for delivery. However, judging by the European Commission’s position, the main disagreements will be on 30-35 billion cub.m. of the Turkish Stream.

The transit contract between Russia and Ukraine expires in 2019, while main Gasprom’s contracts for delivery to the European buyers have a significantly longer period (in particular, the biggest one is with the Italian Eni company for delivery of up to 25 billion cub.m. of gas is effective till 2035).

There are three variants of development of events

Second one –  prolongation of the transit contract till 2019 with transfer of points of Russian gas delivery for the contract volumes, which are going to be in the zone of uncertainty, to the Russian-Ukrainian border. The European counter-agents of Gasprom will have to assume the transit risks for gas transportation via Ukraine. Russia will sell gas on the Ukrainian border till expiration of the effective contracts. The contracts will not be extended, therefore the European consumers will have to either look for the alternative and most likely more expensive suppliers, or to change the point of gas delivery in the effective contracts with Gasprom considering the new routes.

Third one – signing of a new transit agreement between Russia and Ukraine on the other conditions and the volume of transit will be significantly decreased and Russia will hardly agree to the condition “pump and pay.”

Most likely by 2020 a combination of these three approaches, for instance, construction of two-three branches of the Turkish Stream and partial pointing of the receiving transportation capacities for this gas on the EU territory will be outlined. Modification of part of Gasprom’s contracts is possible within the framework of change of points of gas delivery on the Russian-Ukrainian border or concluding a new transit agreement, in which the transit volume will be significantly decreased and the commitments of the sides will be revised.

As the effective contracts are expired, the detailed outlines of the mutually beneficial cooperation will become clearer. The commercial conditions of the new Russian-Hungarian gas contract (the effective contract expires this year) will serve as an indicator of the future configuration of Russian gas export to Europe, reported Forbes.ru.