Russia’s OAO Gazprom is preparing to lay pipes for the Turkish Stream project by early June without waiting for the signing of a formal agreement with Turkey.

Oleg Aksyutin, a member of Gazprom’s executive board, told reporters on May 19th that the construction on the offshore section of the 1,100 km Turkish Stream pipeline will begin in the shallow waters of the Black Sea in early June.

What is the reason for undertaking such a huge risk?

Firstly, Turkey is preparing to hold parliament elections on June 7th and government is seriously engaged in competing with rival parties. Reformulation of the cabinet after elections would take time, while it is not clear which party would win.

Current Energy Minister Taner Yildiz has taken a hard position in moving forwards in signing a formal agreement due to on-going negotiation with Russia over the amount of discount in the pricing of natural gas bought by Turkey. The Russian side may believe a new Energy Minister in future Turkey’s government will have a less strident position.

One of them with a transit capacity of 15.75 billion cubic meters per annum (bcm/a) is projected to deliver gas to Turkish domestic markets by the end of 2016.  After that, other three pipelines with similar capacity would be stretched to Turkish-Greece borders by 2018, according to what Russia has scheduled.

For laying the pipes in the bottom of Black Sea, Russia rented two pipe-laying vessels from Italian Saipem company in last fall. Following the cancellation of the South Stream pipeline project in late 2014, Gazprom has paid €25 million monthly to  Saipem without any usage of the vessels (Castoro Sei and Saipem 7000).

On the other hand, Gazprom’s Netherlands registered subsidiary company South Stream Transport B.V., has license to construct pipelines in Russia’s waters in Black Sea. This company could lay pipes in two third of the Turkish Stream underwater section without requiring an agreement with Ankara to complete the pipeline in Turkish territorial waters. 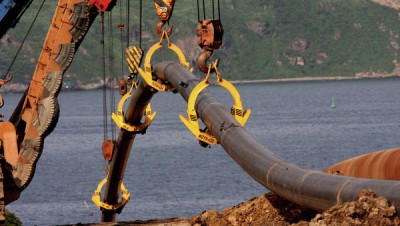 Gazprom agreed on May 5th to provide discounts on Russian gas to private Turkish companies after months of negotiations.

The parties agreed to reduce the price from $374 per 1,000 cubic meters to $300 in the first quarter of the year. In the second quarter the price will be reduced to $260.

The agreement on the discount has been considered effective since January 1, 2015, which means that Gazprom will have to return a part of the payments already made by the Turkish companies.Kommersant Daily put the estimates of the refunds between $250 million and $300 million.

The companies that will be granted the discount include Enerco Enerji, Bosphorus Gaz, Avrasya Gaz, Shell, Bati Hatti, Akfel Gaz and Kibar Enerji, which import more than 30 percent of Russian gas to Turkey.

Turkish state-run petroleum pipeline company BOTAS is the biggest importer of Russian gas, with price discount negotiations currently in a deadlock. Clearly, BOTAS would expect equal, if not preferential arrangements.

Moscow and Ankara signed a memorandum of understanding on the construction of Black Sea pipeline in last December, with the annual capacity of 63 billion cubic meters of gas delivery.

Ilham Shaban is Director of the Azerbaijan Centre for Oil Studies, in Baku