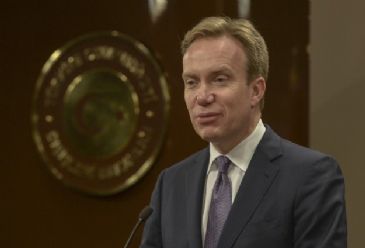 Norway’s Foreign Minister Borge Brende said his country will continue to be a reliable energy supplier, even increasing gas supply if necessary.

“Norway is one of the leading energy suppliers in Europe and we will continue to be one in the area of natural gas. We can even step up supply if there is demand for that in the years to come,” he said. “We will also then, in terms of commercial interest, improve the capacity when it comes to pipes,” Brende said, speaking at a press conference with Turkey’s Foreign Minister Mevlut Cavusoglu on Tuesday.

Brende said that the cancellation of the South Stream pipeline project opens up new opportunities for Turkey as “a main transition country,” adding supplies of natural gas from the Caspian Sea, from Azerbaijan and perhaps, in the future, for Turkmenistan. The South Stream project was an EU plan to bring natural gas from Russia to Europe through Bulgaria. Russia has instead decided to build a gas pipeline to Turkey.

“As you know, Norwegian companies have also invested both in Azerbaijan, and also in this important pipeline that goes through Turkey to be built in the future,” Brende said. “So energy security, and energy access are things that top our discussion list.”

Norway is Europe’s largest oil producer and the world’s third-largest natural gas exporter after Russia and Qatar, according to the U.S. Energy Information Administration. Also, in 2013, Norway supplied 21 percent of the total European natural gas demand.

“What I can guarantee is that Norway will be a reliable energy supplier, not only in the field of gas and oil, but also for the hydro-electricity field, an area in which Norway is the world’s sixth producer,” Brende said.

During the press conference, Cavusoglu and Brende also agreed on boosting the trade volume between the countries, which is currently $1.6 billion.

Cavusoglu also pointed out that Norwegian investors are putting $382 million into Turkey, while Turkish investors only place $3 million in Norway.