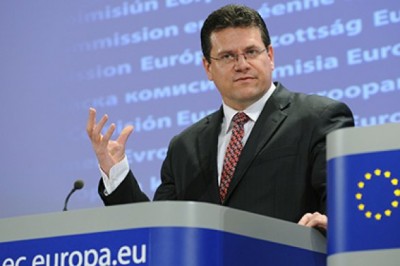 Construction of the gas pipelines as a part of the Southern Gas Corridor, which is planned to be used to export Azerbaijani gas to the European Union, proceeds according to the schedule, said Marosh Shevchovich, European Commission Vice Chairman for Energy Union.

“It was clear from my talks in Baku that the plans are observed and construction of the pipeline proceeds according to the schedule. I have been assured by both Azerbaijan and Turkey that they intend to build the Southern Gas Corridor in time,” Shevchovich told journalists on Tuesday.

He said the Turkish partners have requested the EU to ensure readiness and accept gas into their gas transportation systems, when it reaches the European Union. “We have promised that,” said EC Vice President.