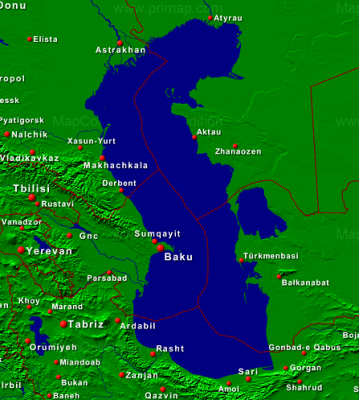 The summit of five littoral states – Russia, Iran, Azerbaijan, Kazakhstan and Turkmenistan – is aimed at legalizing access to oil, gas and sturgeon. There is a preliminary agreement not to let the NATO troops to the Caspian coast. But five countries were unable to divide the resources during the past 18 years.

The summit of the states having access to the Caspian Sea will take place in Astrakhan on September 29, reported the Russian government’s press office. At a briefing on Friday Assistant of Russian President Yurii Ushakov said that the preliminary agreement has been achieved to create two zones in the Caspian Sea – the state sovereignty and fishing zones. They will occupy the area of 25 nautical miles (45 km) off the coast.

The Caspian Five has also agreed not to let the NATO troops to the region. The draft of political statement of the summit envisages “banning of presence of armed troops of non-regional countries in the Caspian Sea.”

“We have had consultations on this matter, but the sides have found an agreement in principal,” Ushakov said.

This is the fourth regional summit. The five countries have to come to an agreement on the key document – the Convention on the Caspian Sea Legal Status.

The Caspian Five has been trying to sign the Convention the past 18 years, said Igor Bratchikov, Russian President’s special representative for delimitation and demarcation of Russian borders with the CIS member-states, Russian Foreign Ministry’s special envoy. He believes that the countries need such a long time to carefully work out the document.

The Convention is aimed at securing right of each country to development of rich in the resources Caspian Sea on the basis of a “fair” formula.

But things are not moving beyond discussions and declarations on intentions. The formula of “fair division” of the right to resources has not been found.

The Russian bottom of the Caspian Sea has been clearly defines and both Azerbaijan and Kazakhstan admit that. Turkmenistan has been waiting  and Iran occupies a position different from Russia’s.

The countries really have a lot to divide. The Caspian Sea water area contains about 90% of world sturgeon resources.

But the shelf is the main subject of dispute. The hydrocarbon resources of the Caspian Sea are estimated at 18 billion tons of conditional fuel. The proved oil and gas resources total 4 billion tons and only the Persian Gulf has more.

At the summit of the Caspian states in 2002 Russia offered a new method of delimitation and division of the Caspian Sea borders – on the basis of the “equidistant median line.” According to this principle, water surface remains in common use for navigation and the Caspian Sea bottom will be divided using median lines. In this case 20% of the bottom would be owned by Russia, 29.5% by Kazakhstan, 21% by Azerbaijan and 17% by Turkmenistan. Iran would get less of all – 12.5%

Iran disagreed to that. But Kazakhstan and Azerbaijan, which would get most of all, have agreed.

Turkmenistan  is opposed to that as well. It believes that the Caspian Sea delimitation must not take into consideration Absheron peninsula and Zhiloy island, which are “special circumstances” according to the international maritime law and should not be taken into consideration while drawing a median line or dividing the sea into the national sectors with 20% to each country.