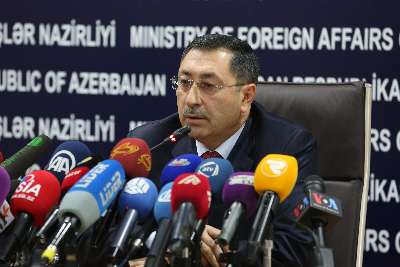 The summit of Caspian states in Astrakhan reached an agreement on the main issues of the Convention on the legal status of the Caspian Sea. The results of the summit are successful, and give reasons to move to a new stage, said at today’s press conference, the Azerbaijani Deputy Foreign Minister, Khalaf Khalafov.
Agreement on a common position on the division of the Caspian Sea was obtained, that gives impetus to the negotiation of the Convention 80-90%, Khalafov said.
The summit adopted a joint declaration and communiqué of the presidents, agreements on cooperation in the field of hydrometeorology and disaster incidents were signed.
An intergovernmental commission on bioresources, which will oversee the protection and use of biological resources was created.
Agreement on disaster management creates a single mechanism to remove them, which is especially important in the development of oil and gas resources. Referring to the provisions of the joint declaration Khalafov said that the essence of the document is that the principles are reflected in the form of a political statement.
The next summit will be held in two years in Kazakhstan. Presidents instructed the working groups at this time to finalize the draft of the Convention.
Answering journalists’ questions Khalafov said that Russia, Kazakhstan and Azerbaijan have completed the delimitation of the Caspian Sea, and this work with Iran and Turkmenistan continues.
Until now, there were differences in the five-party convention. Common principles and rules have been determined. Thus, the sea area is divided into 15-mile national area, and an additional 10-mile fishery zone. All the rest of the sea will be in general use.
Along with this, there is work to develop special regimes in national waters and the total area of the sea. At the same time, will respect the territorial integrity, sovereignty, would not apply force and interference in internal affairs.
With regard to the security and stability, were reached agreements to establish a stable balance of arms in the Caspian Sea. Azerbaijan and other countries opposed the militarization of the Caspian Sea. While military development in the Caspian Sea will be taken into account the interests of the parties. Placing arms should be at a reasonable level and security.
One of the principles is the lack of a military presence in the Caspian third countries. The principle of equal armed parties will be respected.
The declaration also reflected the division of the Caspian Sea. At the same time, negotiations with Iran and Turkmenistan continue as differences on this issue yet saved.
Signing a new agreement on biological resources is expected, and mutual responsibility has been determined on environmental issues.
The next meeting of the ad hoc working group will be held in late November, early December in Baku, Khalafov said.
Asking the question from Turan does not Baku’s agreement on the division of the section of the Caspian Sea into 25 mile zone contradicts the Article 11 of the Constitution of, Khalafov said that the agreements are not contrary to Azerbaijani law and international norms.
According to the Constitution, the Azerbaijani sector of the sea – its bottom, surface and the airspace is the area of the country. National sector covers the area, much further than 25 mile.