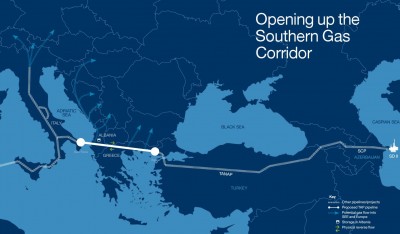 State Oil Company of Azerbaijan (SOCAR) has created two companies as a part of the Southern Gas Corridor project. The companies were established on July 24, 2014 and the information was officially announced by the Ministry of Taxes (the state agency for registration of commercial legal persons) in the special issue of Taxes newspapers on August 20, 2014.

Both companies – SOCAR Upstream Management International and SOCAR Midstream Operations – are located in SOCAR’s head office and have an authorized capital of 1,000 AZN.

In February 2014 Southern Gas Corridor closed-type joint stock company (JSC) was established to manage the following projects – Shah Deniz Stage 2, expansion of the South Caucasian gas pipeline, trans-Anadolu (TANAP) and trans-Adriatic (TAP) gas pipelines. The authorized capital of JSC  is $100 million. The Azerbaijan Ministry of Economy and Industry paid 51% and SOCAR – 49% of shares of the company. JSC is the founder of two companies – SGC Upstream and SGC Midstream.