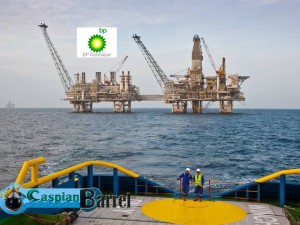 The Western Chirag platform, which is located between the Chirag-1 and Deep-water Guneshli platforms, was built as a part of the Chirag Oil Project. The project was authorized in March 2010. Almost $4 billion has been spent for the platform construction. BP and the partners have invested another $2 billion for the offshore drilling works.

BP-Azerbaijan President said that 14 preliminary operation wells have been drilled as a part of implementation of the offshore part of the Chirag Oil Project. “However, not all of them were put into the productive bed. Thus, we have started extraction from the fifth well and successfully completed it. Our goal for this year is to put into operation six wells,” Birrell explained.

Asked by Turan about productivity of the first well BP-Azerbaijan President said the measurements were based on the minimal calculations (not all connecting pipes are opened yet) and the production rate of the well was 3,000 barrels a day.

“It is hard to speak about productivity of other operation wells. We have to put them into operation and monitor them in operation. Only after that we will be able to provide an accurate forecast of production on the platform. However, our specialists believe that this year we will be able to extract in average 60,000 barrels of oil a day or about 3 million tons,” Birrell added.

However, even after putting of the Western Chirag into operation, the consortium will not be able to increase production on the contract area. BP-Azerbaijan President explained that this year it is planned to suspend two production platforms on ACG for technical maintenance. “I mean Central Azeri and Western Azeri platforms,” he said. As a result of that production on each platform will be fully suspended for several weeks. This will affect the production, even though insignificantly.

Birrell said that during 2013 32.5 million tons of oil was extracted on ACG.