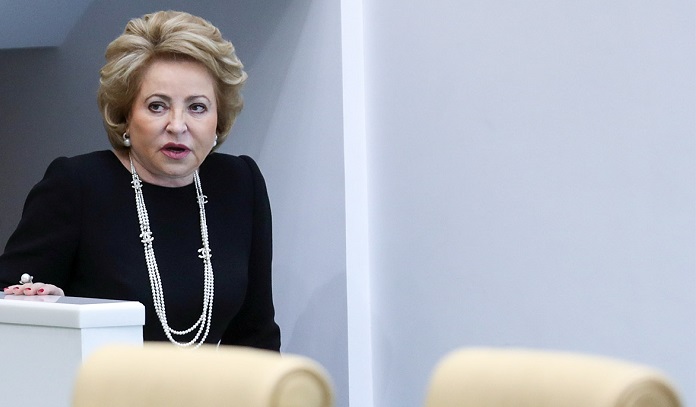 Russia will fully meet its current obligations on gas supplies to Europe and will also try to provide extra supplies, should the need arise, Federation Council Speaker Valentina Matviyenko said in an interview with the Greek parliament’s TV channel during a working visit to Athens.

“Everything that Russia is obliged to deliver to Europe this winter and next year will obviously be fully delivered. And if we have the opportunity and extra orders, we will try to provide additional gas supplies as well. I believe this situation with the explosive wave of gas price hikes will teach us a lot,” she explained.

“There is no need to be afraid of energy dependence on Russia. Prices particularly surged because liquified natural gas that was to be supplied to Europe by the United States was reversed to other countries due to a higher price there. Russia will meet all its obligations,” Matviyenko assured.

The European Union itself, and not Russia, chooses the EU’s energy policy, she stressed. “Russia cannot influence it, we simply express our position that it is probably too early to ditch nuclear energy, which is safe, environmentally sound and generates the cheapest electrical energy. The green agenda should be promoted, but it should not be rushed, it has to go step by step, as problems are solved. It is impossible to abandon coal, gas, and oil, since new green energy technologies can neither provide now, nor will they be able to, tomorrow, fully ensure Europe’s demand for energy resources,” the speaker of the Federation Council noted.

Russian President Vladimir Putin said at a meeting of the Valdai International Club on Thursday that the gas shortage in European countries this year might amount to about 70 bln cubic meters as Russia is increasing its gas supply while deliveries from the US and Middle Eastern nations are declining.

Europe’s gas crisis deteriorated this autumn after it’s spot prices soared past $1,000 per 1,000 cubic meters and approached $2,000 per 1,000 cubic meters amid sorely low occupancy of gas storage facilities. Market watchers believe a set of factors triggered the crisis. One of them is an upsurge of gas demand in Asia, which pushed prices on the Asian market higher, as well as an outflow of deliveries from the European market. The fact that the share of wind generation plummeted in Europe also contributed to the deterioration of the situation. However, gas storage facilities having serious lows has become the main reason for the serious volatility on the gas market. As of mid-October, European underground gas storage facilities are 71% full of the volume of gas raised from them last season.