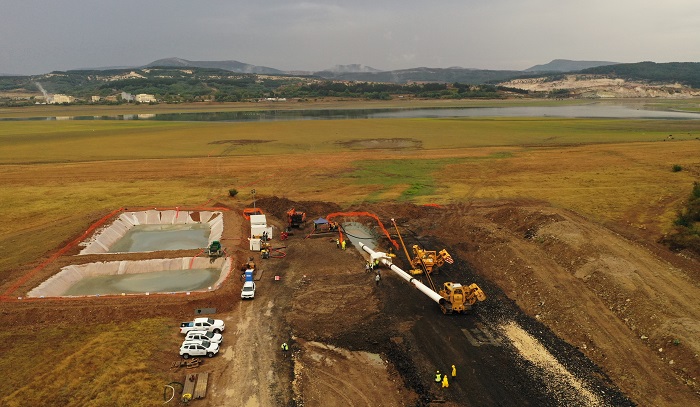 A great engineering feat, IGB’s second horizontal directional drilling is now in the top five longest gas pipeline installations of this diameter executed to date in the EU

The interconnector Greece-Bulgaria successfully crossed Studen Kladenets dam in Bulgaria, marking the most critical and challenging construction milestone so far. With a total length of 1 440 m and a 32-inch diameter, this horizontal directional drilling (HDD) is now in the top five longest gas pipeline installations of this diameter executed in the EU. To date, the ranking is headed by the crossing of Axios River for the TAP project in Greece.

The HDD under Studen Kladenets began shortly after the successful completion of the first crossing under Maritsa River (422 m). The complex activity was expected to take a total of 150 days, but thanks to the solid expertise of the field teams, the subcontractor HDI and the excellent organization on site, the drilling was completed in less than two months. The timeframe for this activity is of utmost importance not only for the timely completion of the IGB pipeline, but also with regards to the limited environmental window requirement, prohibiting construction activities taking place during the nesting season of birds and other protected species in the region. This pushed the schedule up against a tight frame for completing the HDD prior to the wet autumn season and hostile cold winter months.

After extensive preparation activities on site, the pilot drill started in the first week of August. It took the drill head a week of continuous work to reach the exit point at the south side of the dam and another four weeks to achieve the required diameter according to the detailed design. The final pullback was completed during a 12 h record operation involving a team of more than 30 people working around the clock to successfully pull the pipe under Studen Kladenets dam.

The HDD method, although technically more challenging, was selected as the only feasible approach for the IGB pipeline. The EIA decision was granted after an extensive planning and permitting process ensuring that the gas pipeline will go well below the dam’s bottom limiting the environmental impact on the delicate surrounding landscape. Using HDD as the method of installation also eliminates the need to apply a more costly alternative of having to divert tens of kilometers around the dam or going for an open trench, which is significantly more damaging to the environment.

The crossing presented a number of challenges and obstacles along the way, including the overall length and diameter of pipe to be drilled, the steep entry and exit angles, the diverse geology profile, the tight window frame and the immense pressure on the crews to make no mistakes and finish on time.

“This indisputable achievement is yet another proof that the interconnector Greece-Bulgaria is a game changer in every way – not only for the regional energy market, but also in terms of engineering and technical approach. This is the first successful HDD drilling of such scale ever carried out in Bulgaria”, said ICGB’s Executive Officers Teodora Georgieva and Konstantinos Karayannakos. According to them, the crossing under Studen Kladenets posed the greatest technical difficulty and now with its successful completion one of the major risks associated with the linear section of the IGB project is alleviated.