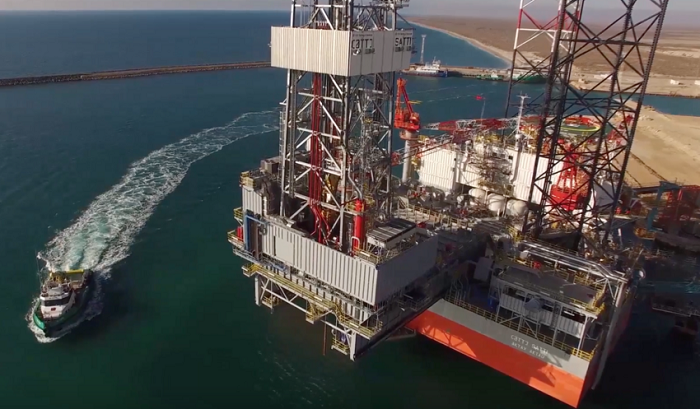 The modification of the jack-up floating drilling rig “Satti”, which will be used in the shallow waters of the Absheron archipelago, is nearing completion, Report informs, citing KazMunayGas NC JSC

In February, KazMunayGas and the State Oil Company of Azerbaijan (SOCAR) agreed on the joint operation of the Satti drilling rig in the Azerbaijani sector of the Caspian Sea.

The joint venture agreement between KMG Drilling&Services LLP (a subsidiary of KMG) and Caspian Drilling Company Ltd (a subsidiary of SOCAR) provides for the drilling of two exploration and one option wells in the Shallow Water Absheron Peninsula structure ((SWAP – shallow water of the Absheron archipelago) in the Azerbaijani sector of the Caspian Sea using jack-up rigs. The operator of the Shallow Water Absheron Peninsula project is British Petroleum Absheron Limited.

Jack-up rig ‘Satti’ is the first offshore drilling rig built in Kazakhstan. It is designed for drilling operations in the Caspian Sea at a sea depth of up to 80 meters.

On June 19, 2019, the jack-up rig was towed to Baku under the trust management agreement between KMG Drilling & Services LLP and Caspian Drilling Company Ltd. The agreement provided for the modification of the drilling rig, which would allow for the safe and efficient drilling of exploration wells over 6,000 meters deep.

As noted in KMG, participation in such projects allows increasing the competitiveness of the Kazakhstani oil and gas sector and gaining experience in offshore drilling operations.

KMG is the Kazakhstani national operator for exploration, production, processing and transportation of hydrocarbons, representing the interests of the state in the oil and gas industry. 90.42% of the company’s shares belong to the Samruk-Kazyna State Fund, and the National Bank of Kazakhstan owns 9.58%.