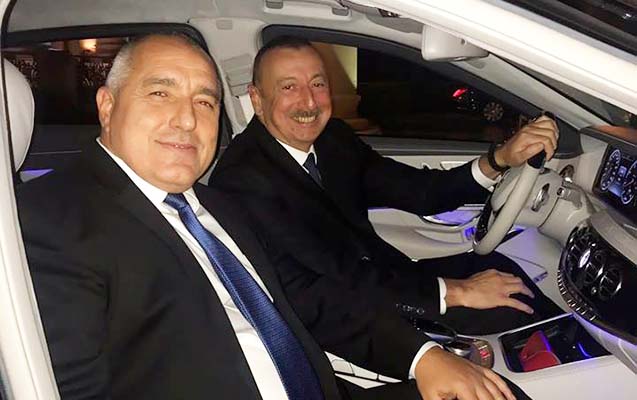 Prime Minister Borissov broke the news – starting January 1, 2021 onwards, natural gas from the Shah Deniz-2 field will flow into the country via the Southern Gas Corridor and thus, he concluded, diversification of supplies will become a reality

The Bulgarian state gas trader Bulgargaz, indeed, has signed a contract to purchase 1 billion cubic meters of natural gas from the Azeri Gas Supply Company (AGSC), starting next year. The logistical challenge for the gas delivery, following the delay of the Greece-Bulgaria interconnector, was resolved mainly through the alternative Siderokastron-Kulata link. The interruptible capacity offered by this route is not a full-fledged substitute of the firm capacity in the IGB, but still a reasonable interim solution.

The supplies of Azeri gas to the region are not the only form of gas diversification, as Gazprom’s share has been steadily declining in Greece and Turkey. Bulgaria has been a mixed story, exemplified in Bulgargaz strong bond with Gazprom allowing it to dominate the national gas market.

With the start of Azeri gas deliveries, the Bulgarian state gas trader faces a significant challenge reconciling the agreed volumes in its long-term contracts with Gazexport and the Azerbaijani Gas Supply Company, – respectively 3 and 1 billion cubic meters. They exceed by a vast margin the 2,5 bcm sold internally last year. Even when discounted for the “take it or pay” clause, the volumes-at-riskof-not finding-a buyer are impressive. Diversification, recognized as natural gas flowing from various sources, has been already a fact for almost two years, due to the import of liquefied natural gas through Greece.

Diversification understood as genuine competition, from multiple players, pushing down prices from the higher than regional average levels, is still to come.

Bulgargaz might try to opt-out of the conundrum by renegotiating the contract terms with AGSC and by taking in smaller “token” volumes in the first quarter of 2021, buying itself time. However, this will not be an easy sell as the sales contract stipulates equal takes of 1/12 of the annual volumes. The AGSC will have to concede to receiving fewer revenues and could legitimately resort to cash in on the 100-million-dollar contract guarantee.

Bulgargaz could equally resell the ‘excess’ gas, provided it is competitively priced both inside and outside the country, or it could store it in the Chiren UGS for subsequent transactions. The main impediment, however, is Bulgargaz’s capacity to transact and compete in the regional market, which leaves the most likely option of finding a buyer for its Azeri gas among the more prominent players.

The current oil-indexed formula is a mixed blessing – the price of the Azeri gas is currently attractive vs the EU spot market price and could remain such for the coming winter months. But this is not a certainty – a lot will depend on the winter season, the rate of depletion -in the unprecedentedly full gas storage facilities in Europe and more specifically Ukraine. If the temperatures remain above seasonal averages and the demand is low, we could observe record low prices in January onwards on the EU spot gas market, making Azeri gas a tough resell.

One possible destination for “excess” Azeri gas for Bulgargaz, at least in theory, could be North Macedonia, which has been paying for years the most expensive gas in Europe. The load up in the gas pipeline, which connects Bulgaria’s transit system to Skopje, is below 20 per cent of capacity; still, third party access is blocked by Gazprom. Bulgargaz is not taking the case to Moscow or the European Commission, which could enforce a capacity release action. The outcome is a ”lose-lose’ scenario, indicating the lowest point in bilateral relations between Bulgaria and N. Macedonia. In the interim, Greece and North Macedonia are pushing through with a direct gas interconnector, expected to be ready by the end of 2021.

Bulgargaz could also offer its excess gas on the Bulgarian Gas Exchange – the Balkan Gas Hub. This scenario implies intersystem agreements and exit/entry firm and interruptible capacities at all borders.

Gazexport is ‘sitting’ on tens of billions cubic meters of gas, seeking buyers and has started offering spot traded gas on the Turkish-Bulgarian border via its electronic trading platform in St. Petersburg. The quantities have been modest at the first 9-11 November round. Still, following the collapse of sales in Turkey, the Russian gas monopoly will protect fiercely its market share challenging the partially oil-indexed Azeri gas with competitive spot gas pricing.

ASGC has already agreed to change its pricing formula for Greece’s DEPA and Turkey’s BOTAS to include spot benchmarks and make Azeri gas more competitive. Bulgargaz has so far been denied this chance.

The enduring competitiveness of Azeri gas is not a foregone conclusion amidst lower demand over the Covid pandemic and resulting economic recession. Long-term gas supply contracts, featuring full or partial oil indexation are hardly a safe haven in a turbulent and ultra-competitive European gas market, oversupplied and marked by the complete dominance of spot trade.

Five years ago, when Shah Deniz-2’s current 25-year supply contracts were signed, underwriting the $ 45 billion investments made in the Southern Gas Corridor, this seemed like the perfect deal, boosting energy security and diversification of both routes and source.

Judged against today’s prospects, the contracts seem like only one in many options and often not the most competitive.