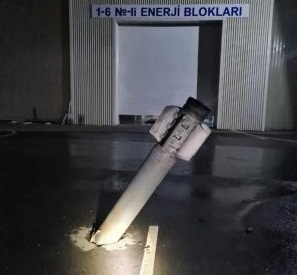 Yesterday, at about 22:00 local time, one of the missiles fired by the Armenian armed forces at the city of Mingechevir (300 km west of Baku) fell near the power unit of the Azerbaijan thermal power plant

Although no infrastructure was seriously damaged, five civilians were injured. Aide to the President of Azerbaijan – Head of the Foreign Policy Department of the Presidential Administration Hikmet Hajiyev announced this on his Twitter account.

He explained that the rocket fell right next to the power unit of the operating power plant, with a capacity of 2,400 MW, the largest in the Caucasus.

To remind, on October 4, Armenia launched four short-range ballistic missiles from the Tochka-U complex to the Azerbaijani energy-industrial city of Mingechevir. Two missiles were shot down by the Azerbaijani air defense. And another rocket exploded before reaching the Mingechevir hydroelectric power station.

Fighting between Armenia and Azerbaijan resumed on the morning of September 27 in Nagorno-Karabakh after a brief skirmish in mid-July and continues to this day. Azerbaijan liberates one by one its settlements, which since 1993 remained under the occupation of the Armenian armed forces. Having lost its strength for self-defense, Armenia wants to inflict heavy damage on Azerbaijan in the rear, moreover, on civilian objects.