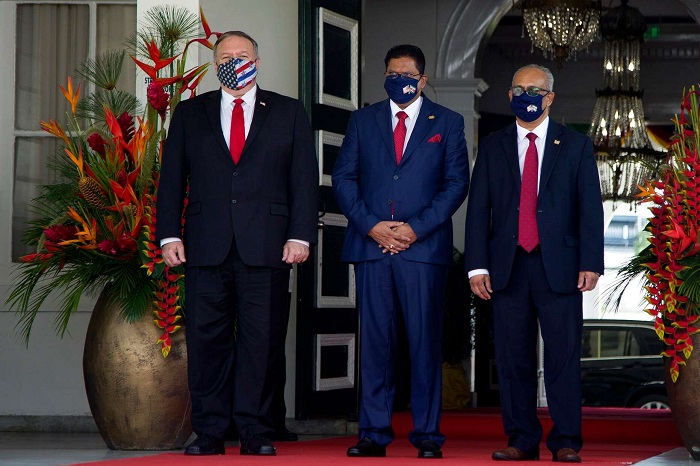 U.S. Secretary of State Mike Pompeo carried out a promotional campaign for U.S. private companies in Suriname and Guyana, two small but newly famous for their oil wealth South American countries, warning their leaders to beware of doing business with Chinese state companies.

“No state-owned operation can beat the quality of the products and services of American private companies,” Pompeo said during a joint news conference with newly elected Suriname president Chan Santokhi, as quoted by AFP.

“We’ve watched the Chinese Communist Party invest in countries, and it all seems great at the front end and then it all comes falling down when the political costs connected to that becomes clear. And we do our level best wherever I travel to make the case for just making sure everybody understands what they’re getting into.”

Suriname made headlines early this year after Apache and Total struck oil for the first time off its coast. The Maka discovery was made in close proximity to the Stabroek block in the waters of neighbour Guyana, which has so far yielded more than a dozen discoveries, bringing the block’s estimated reserves at more than 5 billion barrels.

Guyana was also on Pompeo’s visit agenda. There, he has a similar message for the new leadership of the country, whose newly discovered oil wealth has made it the brightest new star on the oil industry map. This year, despite the pandemic, Guyana’s economy is expected to grow by 85 percent, making it the best performer globally.

Guyana and Suriname share the same-name basin, which the U.S. Geological Survey estimates could hold up to 14 billion barrels of oil and 32 trillion cu ft of natural gas. Yet these are estimates from 2012 and since then, the recoverable portion of this has certainly increased given the advancements in extraction technology. The two could become—or rather could have become, before the pandemic—hot spots in oil and gas. But more than that, they may join the Chinese Belt and Road infrastructure investment initiative, which would not sit well with Washington.