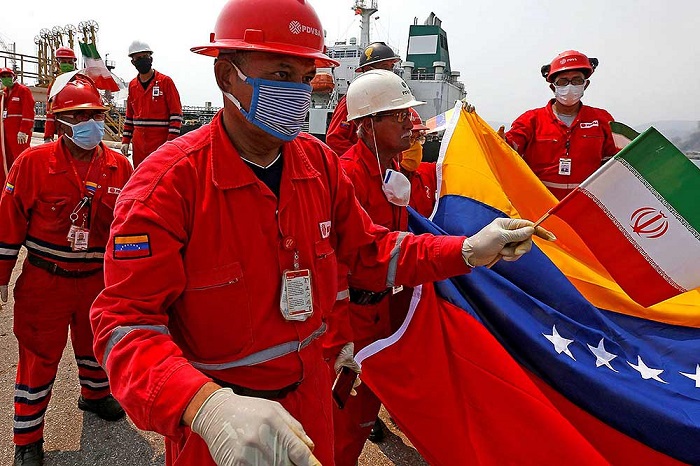 After Iran delivered condensate to Venezuela via an Iran-flagged tanker, the same tanker is now loading Venezuelan crude oil at a terminal in the Latin American country, in defiance of the U.S. sanctions on both countries’ oil industries and exports, Bloomberg reported on Wednesday, citing a shipping report.

The tanker currently known as Honey had offloaded condensate from Iran at the Venezuelan port of Jose earlier this month, Bloomberg reported last week, quoting a source with knowledge of the matter and a report.

Now the same tanker, according to the shipping report seen by Bloomberg, is preparing to ship Venezuela’s Merey crude grade, helping the country with the world’s largest crude oil reserves to export more of its oil while U.S. sanctions have scared off many buyers, shippers, and insurers from doing business with Venezuela.

Despite sitting atop of the largest oil reserves in the world, Venezuela is in the grips of a severe gasoline shortage as refineries are unable to operate normally because of a shortage of diluents necessary for the production of fuels as well as an urgent need for repairs.

Lack of diluents, lack of maintenance, lack of money, and lack of spare parts have forced Venezuela’s refineries to operate at very low processing rates, if at all, and the holder of the world’s biggest oil reserves doesn’t have enough gasoline for its people.

Iran, as a fellow target of U.S. sanctions, has declared its readiness to help Venezuela deal with the shortage, and earlier this year managed to send cargoes of fuel to the Latin American country.

Iran is also reportedly helping Venezuela to reverse the decline of its crude oil production. Iran has sent professionals to help Venezuela repair its crumbling refineries and it is now sending to Venezuela the superlight crude grade known as condensate to blend it with the heavy crude and produce exportable grades of crude oil.