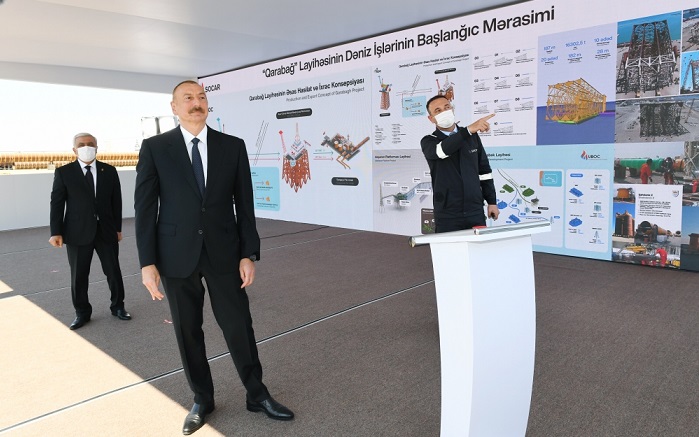 On August 10, President of Azerbaijan Ilham Əliyev took part in the ceremony of sending the support block of the production platform to the sea to be installed at the Qarabağ field, the website of the head of state reports.

“The support block was built at the Baku deep-water foundation plant named after. H. Əliyev. The block was built by BOS Shelf (subsidiary of the State Oil Company of Azerbaijan),” the message says.

SOCAR and Norwegian Equinor in March 2020 confirmed the discovery of the Qarabağ field in the Azerbaijani sector of the Caspian following the results of appraisal drilling. The depth of the productive strata is 3.4 km.

Geological oil reserves at the field are initially estimated at more than 60 million tons.

The next step is to install a stationary offshore platform on the support block and start production.

The project for the development of the Qarabağ field provides for the drilling of 12 wells – 6 oil wells, 3 gas wells and 3 water injection wells. Oil and gas produced at the field will be delivered to the shore through the infrastructure of the Azəri-Çırag-Günəşli block.

In turn, Ağamalı Gurbanov, project manager of the Qarabağoperating company, told reporters that the primary oil reserves recoverable from the field are more than 21 million tons, gas – 13 billion cubic meters.

It is planned to produce more than 4 thousand tons of oil and 4.5 million cubic meters of gas every day. “

Production at the field is scheduled to begin at the end of 2022.

As the Caspian Barrel found out from sources in SOCAR, the total capital expenditures within the Qarabağ project are projected at about $ 2.5 billion before production starts.

SOCAR and Equinor signed a Risk Service Contract in Baku on May 31, 2018 for the development of the Karabakh field. To implement the project, SOCAR and Equinor created an operating company on parity shares (50% to 50%).

The Qarabağ field is located 120 km east of Baku. The sea depth in the area of ​​the field is 180 meters.